In this application note, we describe a novel method to rapidly measure the size and concentration of Adeno-Associated Virus (AAV), utilizing the Nanoparticle Tracking Analysis (NTA) technique and a gold labeling method.  By labeling AAV capsids with small gold nanoparticles, we were able to increase the amount of light scattered by each capsid, enabling rapid NTA characterization to determine the virus concentration and aggregation state.  NTA characterization of AAV was previously impossible without gold labeling.

In this application note, we describe a novel method to rapidly measure the size and concentration of Adeno-Associated Virus (AAV) utilizing the Nanoparticle Tracking Analysis (NTA) technique and a gold labeling method.  By labeling AAV capsids with small gold nanoparticles, we were able to increase the amount of light scattered by each capsid, enabling rapid NTA characterization to determine the virus titer and aggregation state.  NTA characterization of AAV was previously impossible without gold labeling. This method should be applicable to other virus types, assuming the surface chemistry is similar.

This new technique extends the benefits of simultaneous size and concentration measurements, both as an alternative or a supplement to traditional titer assays and as a check of aggregation state. The differing stability of various formulations may have a significant effect on final product performance but may not be adequately measured with current and traditional techniques.

Nanoparticle Tracking Analysis (NTA) utilizes the properties of both light scattering and Brownian motion in order to obtain the particle size distribution of samples in liquid suspension. A laser beam is passed through the sample chamber, and the particles in suspension in the path of this beam scatter light in such a manner that they can easily be visualized via a 20x magnification microscope onto which is mounted a camera. The camera, which operates at approximately 30 frames per second (fps), captures a video file of the particles moving under Brownian motion within the field of view of approximately 100 μm x 80 μm x 10 μm (Figure 1).

The movement of the particles is captured on a frame-by-frame basis. The proprietary NTA software simultaneously identifies and tracks the center of each of the observed particles, and determines the average distance moved by each particle in the x and y planes. This value allows the particle diffusion coefficient (Dt) to be determined, from which, if the sample temperature (T) and solvent viscosity (η) are known, the sphere-equivalent hydrodynamic diameter (d) of the particles can be identified using the Stokes-Einstein equation (Equation 1), where KB is Boltzmann’s constant.

NTA is not an ensemble technique interrogating a very large number of particles, but rather each particle is sized individually, irrespective of the others. An example of the size distribution profile generated by NTA is shown in Figures 2 and 3.

In addition, the particles’ movement is measured within a fixed field of view (approximately 100 μm by 80 μm) illuminated by a beam approximately 10 μm in depth, allowing a scattering volume of the sample to be estimated.  By measuring concentration of the particles within this field of view and extrapolating to a larger volume, it is possible to achieve a concentration estimation, either in terms of particles per mL for any given size class, or as an overall total.

AAV is a small virus with a diameter of approximately 25 nm[1].  It is commonly used by gene therapy researchers as a viral vector due to its many attractive properties, including its low pathogenicity[2], ability to infect non-dividing cells[3], ability to integrate into a specific location on human chromosome 19[4], and its tunable tropism towards different tissue types[5].  To date, there have been over 130 clinical trials worldwide utilizing AAV as a viral vector[6].

AAV is a well-characterized virus with a known crystal structure[7].  The AAV capsid is composed of three types of capsid proteins (VP1, VP2, VP3) in a 1:1:10 ratio. These three proteins form 5 subunits, to create a total of 60 capsid proteins, resulting in an icosahedral symmetry.

Despite the well-known structure of AAV, gene therapy researchers are still limited in their ability to rapidly measure AAV particle concentration.  The plaque assay, which is commonly used today in academic laboratories, was first developed in the 1950s to measure virus titer[8].  However, the plaque assay is time-intensive, and can require days or even weeks to complete.  Industry has adopted modern techniques like quantitative polymerase chain reaction (qPCR)[9] and colorimetric assays such as enzyme-linked immunosorbent assay (ELISA)[10] to measure genome counts and capsid proteins, to estimate AAV titer.  Despite the advantages of these techniques over the plaque assay, these modern techniques still require hours or even days to complete.  As a result, there is high demand for a method that can rapidly and directly measure AAV particle concentration.

The unlabeled AAV virus is too small and does not scatter enough light to be characterized by NTA.  However, a recently-developed method to label the virus surface with gold nanoparticles has enabled NTA characterization of AAV. This approach utilizes the electrostatic attraction between a highly scattering material such as gold nanoparticles and the viral capsid. The resulting gold-labeled virus particles scatter enough light to be visualized and tracked by the optical system, enabling the use of NTA to measure the size and concentration of AAV.

Using this approach, a series of AAV samples were measured.  A highly-purified gold-labeled sample was selected to compare the concentration measured by NTAto the expected titer.  The gold-labeled AAV produced a size distribution with a primary peak and a particle concentration of 3.55 x 108particles/mL, representing only a 22% difference from the expected concentration of 4.5 x 108particles/mL, based on a 100,000-fold dilution from the neat AAV titer of 4.5 x 1013determined by qPCR (Figure 2 (right, top)).

A control experiment without the use of gold labeling but otherwise using identical conditions was performed.  In the resulting size distribution, the primary peak was not detected, and the measured concentration was much lower (Figure 2B).  The small number of particles that were tracked in the unlabeled AAV sample were likely virus aggregates.  Additional control experiments confirmed that the primary peak recorded in the gold-labeled sample was not due to the presence of gold nanoparticle aggregates or background particles from the AAV vehicle buffer (data not shown). 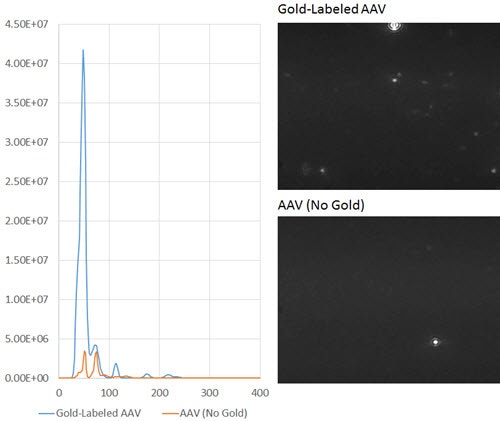 We went on to analyze AAV samples that had undergone a thermal stress test for up to 3 months (Figure 3).  Six AAV samples were heated to 37°C for 0 days, 1 week, 2 weeks, 1 month, 2 months, and 3 months, and were then stored at -20°C.  The samples were thawed on the day of analysis and were labeled with gold prior to NTA characterization.

The results show an increase in polydispersity and a decrease in particle concentration over time.  A primary peak representing monodisperse AAV is clearly visible for up to 2 weeks, but within 1 month this peak begins to diminish. These results show that AAV is generally stable at 37°C for up to 1 week, but shows significant signs of aggregation after 2 weeks.  However, the size distribution and concentration measurements show little change between 1 month and 3 months, suggesting that AAV does not continue to form larger aggregates over that time period.  These results highlight the usefulness of the NTA gold-labeling characterization technique, not only to measure AAV concentration, but also to measure aggregation state and formulation stability. 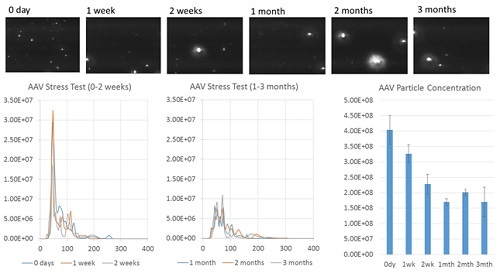 By utilizing the electrostatic attraction between gold nanoparticles and AAV, we have enabled NTA characterization of AAV.  For the first time, it is possible to measure AAV particle concentration in minutes instead of hours or days. Additionally, this approach is a direct measurement of particle size and concentration, and does not require any assumptions regarding AAV genome loading efficiency, infection efficiency, capsid protein integrity, or aggregation state.