Relatively thin samples present problems for conventional XRF analysis, because the relationship between count rate and concentration can be significantly influenced by sample thickness. Omnian corrects for this effect by applying a Fundamental Parameter (FP)-based FT correction.

Omnian sets the benchmark for standardless analysis in X-ray fluorescence (XRF) spectrometry. As a module of the proven SuperQ software suite, it can be used in conjunction with PANalytical’s Zetium sequential XRF spectrometers. Omnian provides the ideal answer for characterization and analysis of unknown samples, or in situations where certified standards are not available. Omnian is designed to provide fast, reliable quantification in the default ‘black box‘ mode. However, unlike traditional standardless approaches, Omnian data is both fully comprehensive and available for full review. This data sheet demonstrates Omnian’s ability to deal with the challenge of finite thickness (FT) in thin samples and fluorescence volume geometry (FVG) effect in thicker low density samples.

Relatively thin samples present problems for conventional XRF analysis, because the relationship between count  rate and concentration can be significantly influenced by sample thickness. This is caused by the analysis depth of X-rays in low-density samples. Analysis depths increase with increasing energies of the X-ray radiation and analysis depths also increase with decreasing sample density. This effect is evident when analyzing medium to heavy elements in low-density matrices such as polymers or oils. For example Br and Zn K-line intensities increase at different rates when the sample thickness is increased from 2 to 16 mm, see Figure 1.

Figure 1. Comparison of 2 and 16 mm thick polymer samples showing the different rates of increase of intensity in scans for Br and Zn K-lines 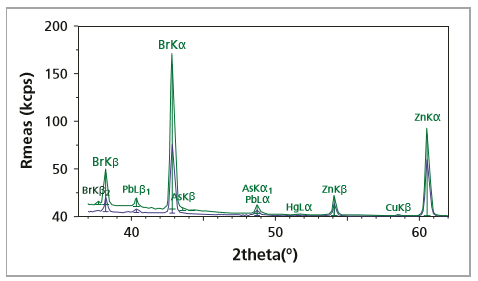 Omnian corrects for this effect by applying a Fundamental Parameter (FP)-based FT correction. The FT correction capability of Omnian is demonstrated by the analysis of toxic heavy elements in a 2 mm thick polymer sample, prepared from EU certified polyethylene reference material, see Table 1.

Table 1. Comparison of certified and measured concentrations with and without FT correction of BCR 681k polyethylene

The results clearly demonstrate the requirement for FT correction when measuring a thin polymer sample. For example, if the correction is not applied to the lead (Pb) and cadmium (Cd) concentration, the results are very inaccurate. The impact of such results can be very detrimental in cases where environmental regulations must be satisfied.

Due to the geometry of the optical path in X-ray spectrometers, the X-ray tube does not irradiate the complete sample volume and the detector does not detect the complete irradiated sample volume. The volume of the sample that is actually detected is a complex 3-dimensional ‘cone-shape’, Figure 2. This complex shape is described as the fluorescence volume geometry (FVG). Traditional FP-based methods oversimplify this geometry leading to inaccurate results. Omnian’s FP model includes advanced FVG correction, allowing it to correct for the complex geometries of the irradiated and detected volumes.

Figure 2. Simplified illustration of the FVG effect in light-matrix samples 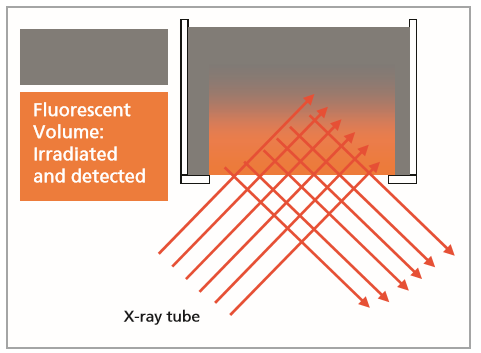 The influence of the FVG effect on the analysis of high- energy analyte lines, for example bromine Kα and cadmium Kα in a thick 16 mm low-density polyethylene sample is presented in Table 2.

Table 2. Comparison of certified versus measured cadmium and bromine concentration; with and without FVG correction

These data clearly demonstrate that FVG correction significantly improves accuracy of cadmium and bromine analysis in a polyethylene matrix.

When analyzing heavy elements like lead, cadmium and mercury in low-density matrices such as polymers FT and FVG effects are always present and must be accounted for. For thin samples of low density FT effects are more prominent. Conversely, when analyzing heavy elements in thick samples with low density, FVG effects are prominent. Tables 1 and 2 demonstrate the magnitude of both effects. Omnian’s advanced FP algorithm corrects both for effects setting a new benchmark in standardless analysis

Omnian incorporates several sophisticated algorithms to determine and quantify the complete composition of most types of unknown materials with a single calibration program. It has been demonstrated that finite thickness (FT) and fluorescence volume geometry (FVG) corrections can significantly improve accuracy, when analyzing heavier elements in low-density samples.