Temperature-controlled SAXS experiments were done to study the thermal stability and melting behavior of a protein in a dilute solution. Irreversible, nonspecific protein aggregation was observed at elevated temperature.

Here we report a SAXS investigation on the thermostability of a high molecular mass glycoprotein (thyroglobulin) in a buffer solution.

Protein structures are stabilized by a delicate balance of weak electrostatic and hydrophobic interactions, as well as by hydrogen bonds. In a protein solution, small changes of e.g. the pH, salt concentration or temperature can result in a disbalance of these stabilizing forces that can lead to protein aggregation and ultimately to denaturation. For protein- based drugs (biologics) protein aggregation can result in loss of efficacy, reduced shelf life and immunogenicity. Therefore, systematic investigations of protein stability as a function of external parameters and the early detection of aggregate formation is very important.

Small angle X-ray scattering (SAXS) is a sensitive in situ technique for detecting the formation of particle aggregates in a solution or dispersion. In SAXS the forward scattering intensity of a given particle is proportional to the square of its volume (or to the sixth power of its radius in case of spherical particles). This means that larger particles scatter much more strongly than smaller particles. Aggregate formation can therefore be evidenced by investigating changes in the intensity and in the slope of the scattering curve at the smallest scattering angles. Here we report a SAXS investigation on the thermostability of a high molecular mass glycoprotein (thyroglobulin) in a buffer solution.

Thyroglobulin from bovine thyroid (Mw 670 kDa) was purchased from Sigma Aldrich. The powder was dissolved in a Tris buffer (50 mM Tris, 150 mM NaCl, pH 7.6) and used without further purification. The protein concentration in the prepared solution was 15 mg/ml. It was filled in a disposable 1 mm quartz capillary and the open end was closed with a cap. The capillary was mounted on a temperature-controlled holder (Fig. 1) and inserted in the vacuum chamber of ScatterX78 (Fig. 2). 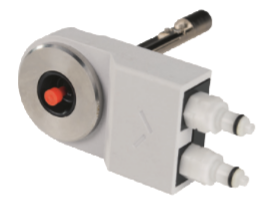 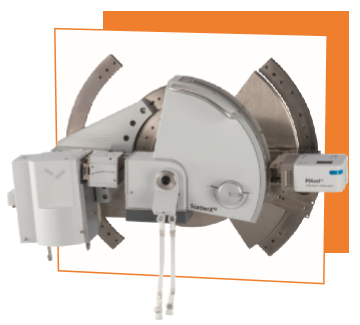 SAXS measurements were done on the Empyrean instrument using a setup with ScatterX78, a temperature-controlled capillary holder, and the PIXcel3D detector. In the Data Collector software a batch program was created to automatically measure a whole series of SAXS data at different temperatures, without the need for user intervention. The temperature profile was programmed in the EasyTemp software (Julabo GmbH, Germany). A heating / cooling cycle between 10 and 70 °C was chosen, with approximately ten minutes of equilibration time at each set temperature. SAXS data acquisition time was only 5 min per temperature step, using the detector in static mode. For background correction the pure buffer was measured separately.

The background-corrected SAXS data that were measured while heating the sample from 10 °C to 70 °C are shown in Figure 3 (top graph). Between 10 °C and 45 °C no significant changes are observed in the scattering curves. From this it can be concluded that the overall protein size and structure remains unaffected. From the curvature of the scattering curve at the smallest angles, the radius of gyration Rg of the protein can be estimated to 7 nm. This value is comparable to that reported in the literature (ref. 1) and points to the formation of well-defined protein dimers.

Upon cooling the same sample back to 10 °C, no further changes in the scattering curves were observed (see Figure 3, bottom graph). This shows that the formation of unspecific aggregates during the heating cycle is irreversible. As not only the shapes but also the absolute intensities of the scattering curves remain unaffected, it can be concluded that the protein aggregates remain in solution and do not precipitate. Our findings described above are in overall agreement with those reported in the literature (ref. 2) for the same protein based on differential scanning calorimetric (DSC) measurements.

Figure 3. SAXS data measured from a dilute solution of thyroglobulin at different temperatures. A heating cycle from 10 °C to 70 °C (top graph) was followed by a cooling cycle back to 10 °C (bottom graph). 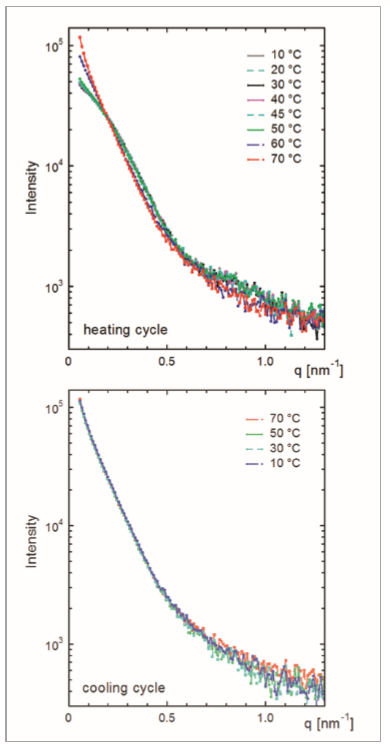 SAXS measurements under controlled sample temperature allow to study the thermostability of proteins in solution. Using the Empyrean platform with ScatterX78, a whole series of SAXS measurements can  be done on a given sample at different temperatures, without the need for user intervention. The formation of protein aggregates can be evidenced from changes    in the intensity and slope of the scattering curves at the smallest scattering angles.