High-k dielectric materials such as BST play an important role in the constant shrinking of microelectronic components. WDXRF spectrometry is ideal for measuring the composition and film thickness, due to its high accuracy and reproducibility. Also underlying Pt films can be analyzed, as demostrated in this report.

High-k dielectric materials such as BST play an important role in the constant shrinking of microelectronic components. Monitoring the BST process is not limited to measuring the film thickness only. Other important parameters are the concentrations of Ba, Sr and Ti, normally expressed stoichimetrically in x and y from (Ba(1-x)SrxTiyO3). Wavelength dispersive X-ray fluorescence (WDXRF) spectrometry is ideal for measuring the composition and film thickness, due to its high accuracy and reproducibility. Also underlying Pt films can be analyzed, as demostrated n this report.

For the measurements a PANalytical 2830 ZT Wafer Analyzer equipped with fixed channels for Ba, Sr, Ti and Pt was used. Details of the measurement conditions are presented in Table 1.

The amount of Ti and Sr was determined using the Kα-lines, the amount of Ba with the Lα-line. The X-ray intensities depend on the concentrations and the film thickness. Calibration lines were set up to obtain a correlation between count rate and the product of concentration and film thickness (mu%)in the range of interest. Fundamental parameter correction was implemented in the calibration to correct for the influence of underlying films and to ensure the validity of this calibration over the whole calibration range in terms of film thickness and concentration. Measuring the Pt-Lα line allows the determination of the Pt film thickness under the BST film simultaneously.

Calibration lines for Ba, Sr and Ti are presented in Figures 1-3. With this XRF method it is possible to cover a BST film thickness range up to 15 µm. Furthermore, a Pt film calibration is displayed in Figure 4 to show the possibility of measuring additional films like Pt under the BST film. Results of the repeated measurement are shown in Table 2. 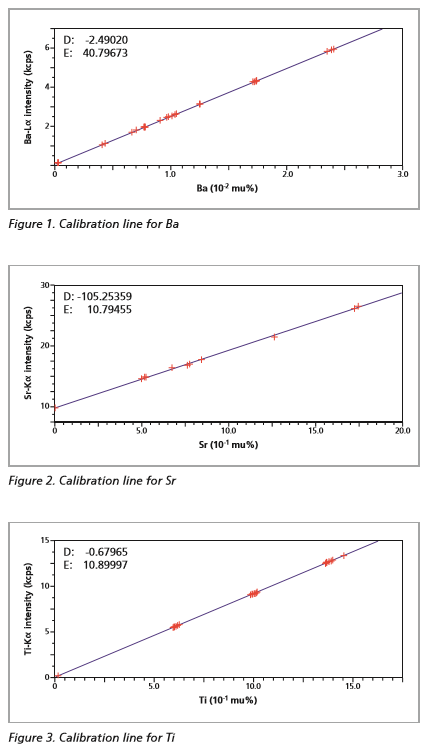 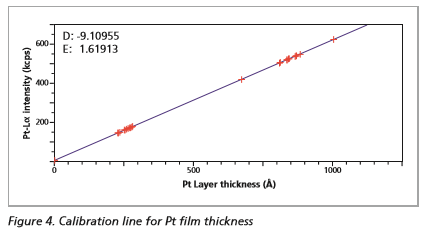 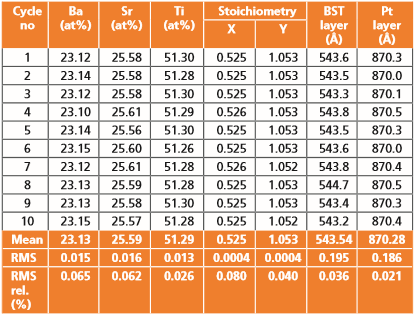 The results in Table 2 show excellent measurement repeatability, as indicated by the low relative RMS values.

The Malvern Panalytical 2830 ZT XRF Wafer Analyzer can accurately analyze BST film thickness and stoichiometry. In addition, the system can do simultaneous analysis of underlying films.