To differentiate between AB block copolymer and a single block impurity, a combination of the Waters ACQUITY APC and the OMNISEC REVEAL advanced multi-detector system was used.  This application note shows the importance and versatility of combining the two systems.

Gel permeation chromatography (GPC) has been embedded in polymer research and the industry for decades now. The technique is used as the primary tool to determine molecular weight and molecular weight distribution of polymer samples. The addition of in-line light scattering detectors and viscometers led to the implementation of triple-detection GPC which is used to determine a sample’s absolute molecular weight, size and structure. The new improved and user-friendly OMNISEC multi-detector GPC system from Malvern Panalytical with its highly sensitive light-scattering and refractive index (RI) detectors, can provide excellent measurements of a broad range of macromolecules. Significant advancements in chromatography have been made with the development of Waters ACQUITY Advanced Polymer Chromatography (APC) system, allowing for the high-resolution and high-speed GPC analyses of materials. The powerful OMNISEC REVEAL multi-detector system has been combined with the ACQUITY APC making it possible to analyze polymers by advanced GPC with improved resolution, reduced sample concentrations, solvent usage and run times.

Running alongside the developments of GPC has been those in polymer research. Research surrounding block copolymers has been increasing rapidly since the 1980s, as their ability to form complex ordered systems has led to applications in many fields. Crystallization driven self-assembly of block copolymers in the bulk has led to the commercialization of many block or “blocky” copolymers as thermoplastic elastomers. These thermoplastic elastomers are used as outer coverings for optical fibers, adhesives, and in artificial organ technology. Another big potential application currently being researched is the use of block copolymers as drug delivery vehicles. Block copolymers self-assemble to form micelles that encapsulates the hydrophobic block as well as hydrophobic drugs. Delivering drugs to target locations not only increases the potency of the drug, it decreases the side effects that occur when the toxic drugs are delivered to the non-target locations.

It is commonly known that the synthesis of these types of materials is carried out by polymerization techniques that may produce several side products. The presence of polymers different from the target block copolymer in the material can affect the performance of the final application of the block copolymers, therefore it is important to be able to identify these impurities. For example, single block contaminants may occur due to poor initiation during chain extension of the A block or undesired exogenous initiation of the B block. These impurities are often difficult to identify by bulk techniques such as nuclear magnetic resonance (NMR). However, using the multi-detection technique of the OMNISEC REVEAL combined with the ACQUITY APC a variety of polymer parameters can be characterized in a single rapid measurement. Two of these parameters, absolute molecular weight and intrinsic viscosity, are combined to generate Mark-Houwink plots, which can be used to identify chemical and structural differences between polymer samples. Often the detection of impurities in block copolymers is solely based on molecular weight increase and retention of peak symmetry. However, this relies on the assumption that the lower molecular weight region is not a block copolymer without any further characterization. To ratify this, the combination of the ACQUITY APC and the OMNISEC REVEAL multi-detector system was used to differentiate between AB block copolymer and a single block impurity. 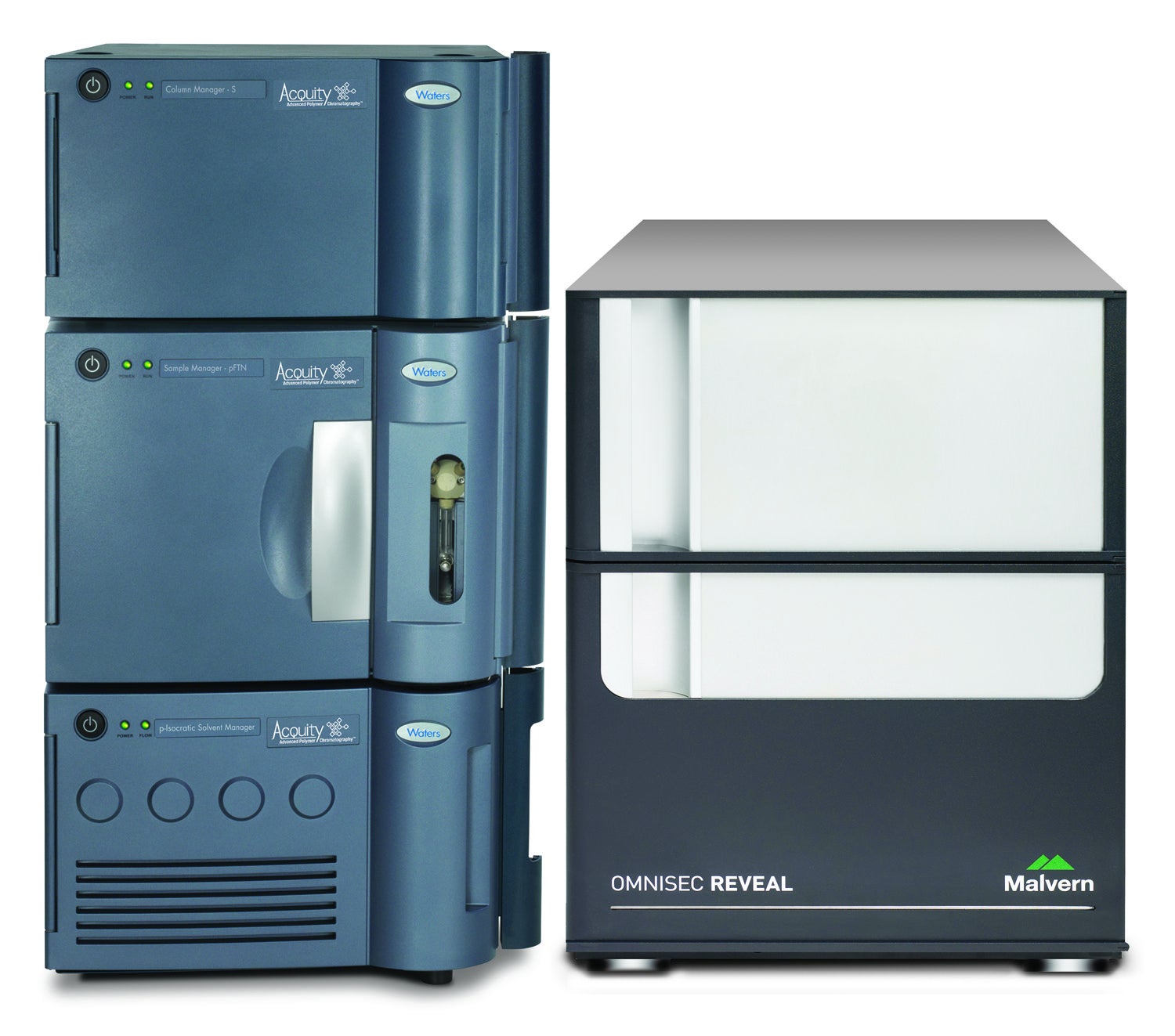 Samples were separated using three Waters APC XT columns, 450 Å, 200 Å and 125 Å connected in series. The mobile phase was THF. Samples were allowed to dissolve overnight to ensure full dissolution. Analyte solutions were prepared to 6 mg/mL. All detectors and columns were maintained at 35 °C to ensure good separation and maximize baseline stability. Injection volumes of 10 - 20 μL (sample loadings of 0.06 - 0.12 mg), were used to acquire the data presented in this application note.

The homopolymers PEG and PLA and the PEG-PLA block copolymer were first analyzed individually and the overlay of the RI chromatograms is shown in Figure 2. 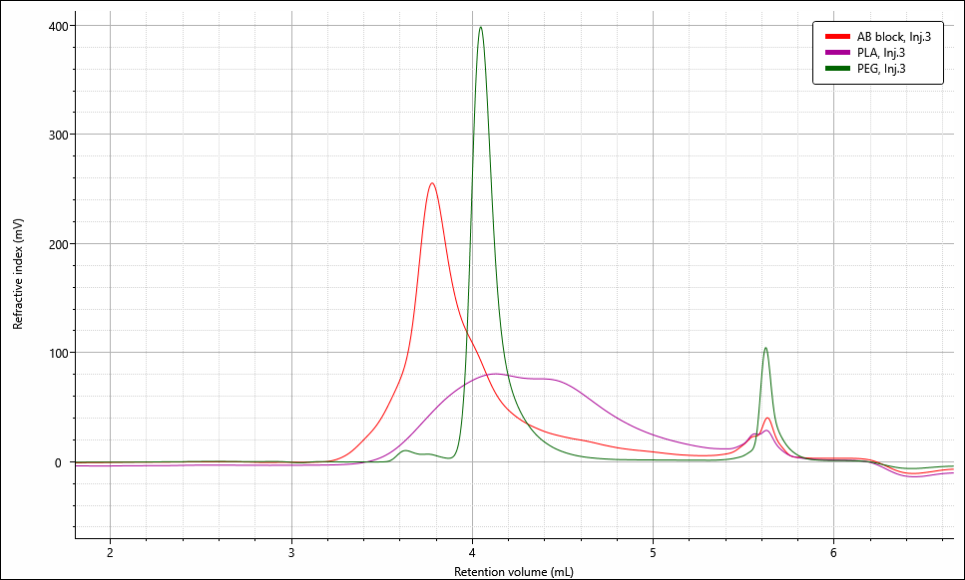 Looking at the retention volume at which the polymers peaks elute, it is possible to notice the fast analysis that the ACQUITY APC system provides. At 1mL/min, in less of 6 minutes the analysis of the polymers is complete. From the observation of the two homopolymers RI chromatograms it is possible to state that if mixed they would fully or partially coelute. In addition, from the figure it is observed that the PEG elutes over a narrow volume range in contrast to the PLA and PEG-PLA block copolymer. 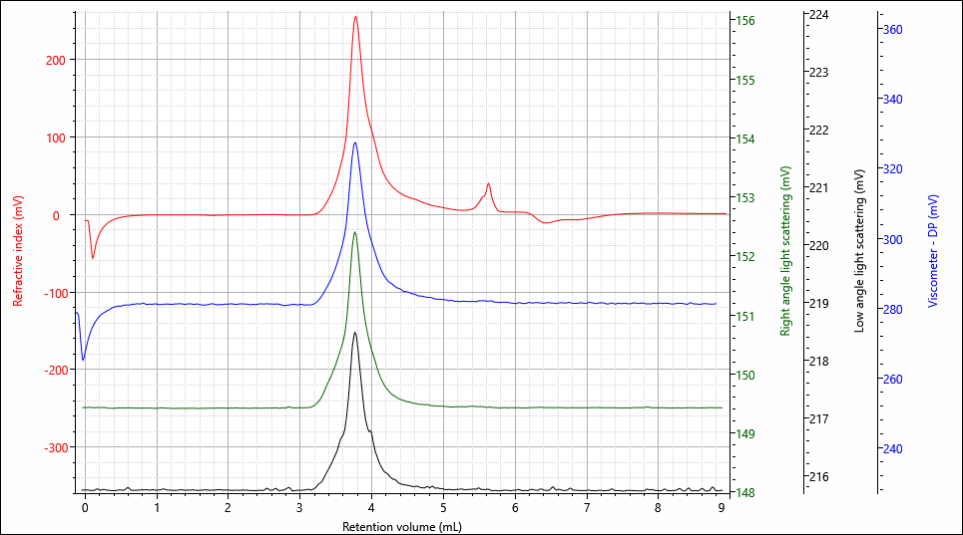 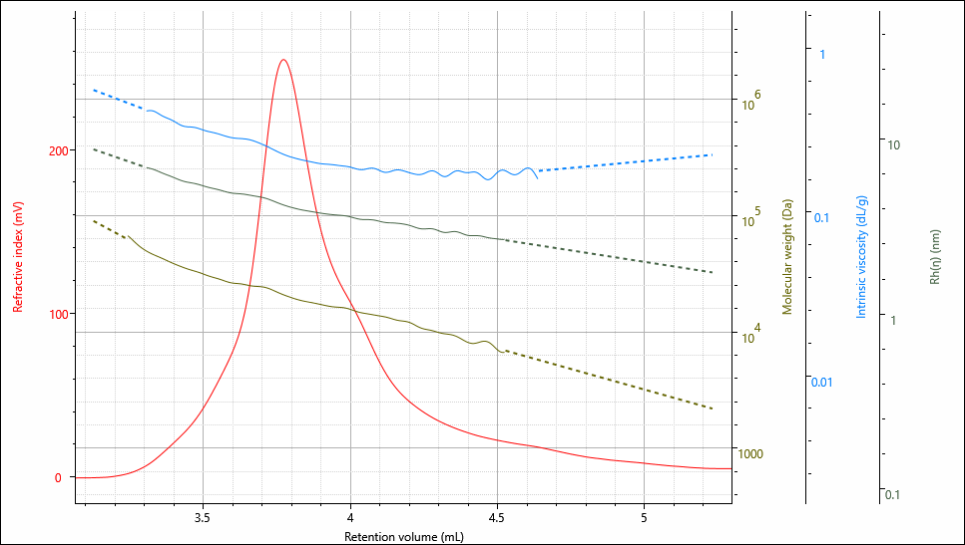 Figure 3 shows a multi-detector chromatogram of the PEG-b-PLA polymer acquired on an OMNISEC REVEAL multi-detector with the ACQUITY APC. The detector responses shown are the refractive index (RI), right angle light scattering (RALS) and low angle light scattering (LALS) detectors, and an online viscometer. Combining the OMNISEC REVEAL and ACQUITY APC allows us to calculate the weight average molecular weight (Mw), number average molecular weight (Mn), intrinsic viscosity (IV) and hydrodynamic radius (Rh) across the sample’s distribution in a short analysis time, as shown in Figure 4. The absolute molecular weight is calculated using the RALS and LALS detectors and adding the viscometer to this provides information on the samples density and hence the polymers structure. The quantitative data on the three samples are presented in Table 1. 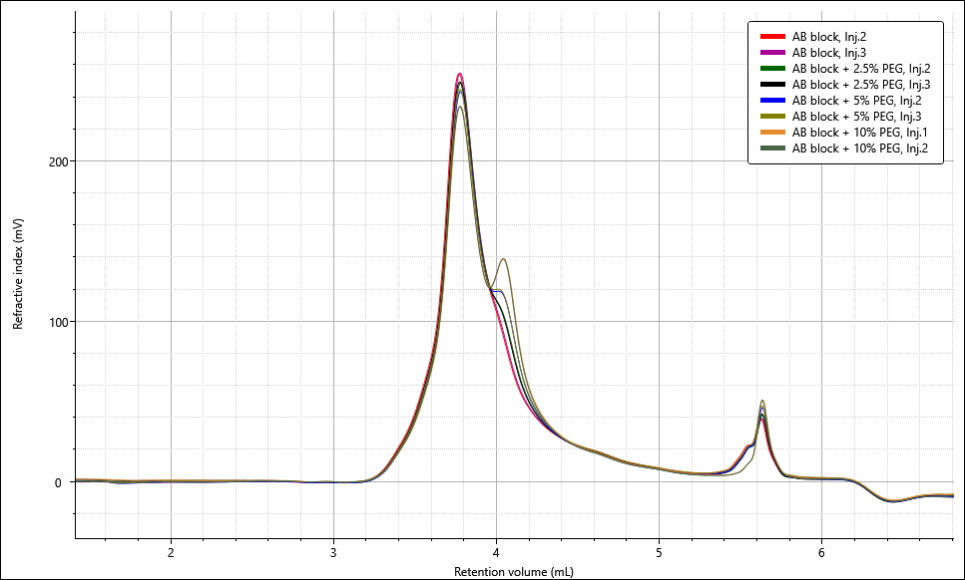 Figure 5: The RI chromatograms of duplicate injections of AB block copolymer without and with 2.5, 5, and 10 % PEG homopolymer. 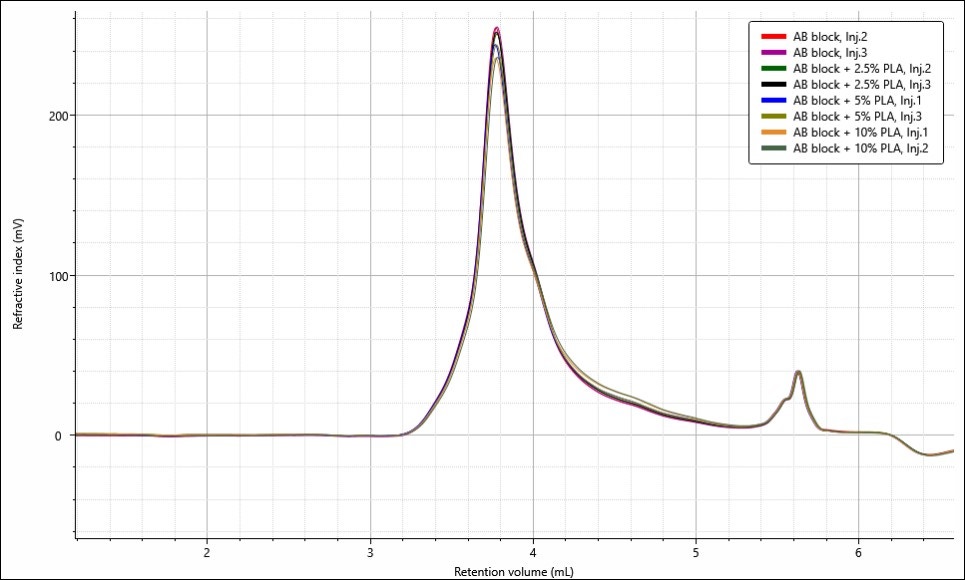 Figure 6: The RI chromatograms of duplicate injections of AB block copolymer without and with 2.5, 5, and 10 % PLA homopolymer.

IV is an inherent parameter of a sample in a solvent. When plotted logarithmically against the Log (molecular weight) it is typically used to compare the structure of polymers of the same chemistry. This is because the denser structures such as branched or star will have lower IV values than their linear counterpart. However, different polymer types would also typically have different IV values from one another. It is this difference that is used below to identify the presence of either PLA or PEG homopolymers in the AB block copolymer. Figure 7 is a Mark-Houwink plot of the AB block copolymer with and without 2.5 % PLA, and Figure 8 is similar but with and without 2.5 % PEG. Studying the low molecular weight range of both Mark-Houwink plots a clear distinction is made between the AB block copolymer with and without 2.5 % of single block impurity, as the samples containing the single block impurities have lower IV values. Duplicates follow similar plots and this illustrates the repeatability of the measurements. 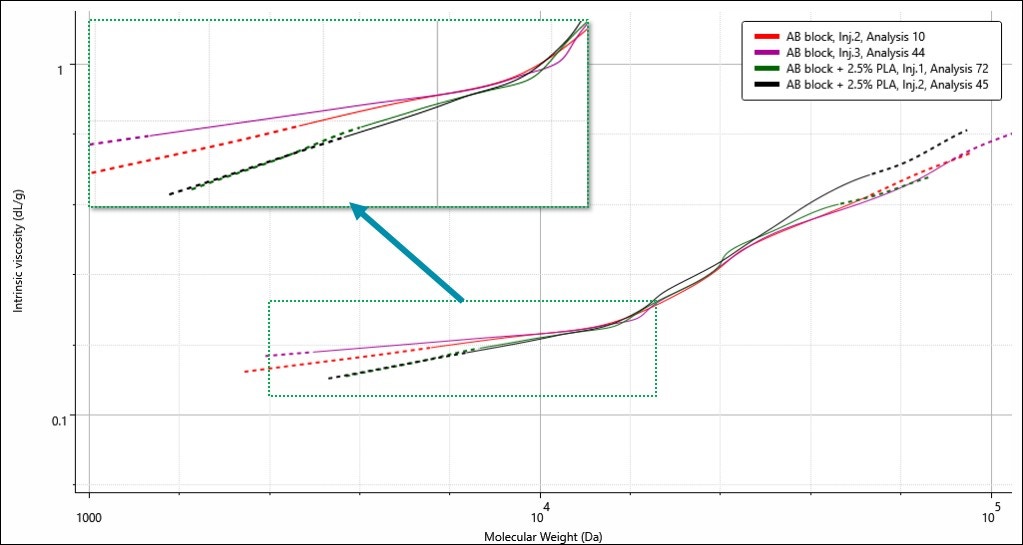 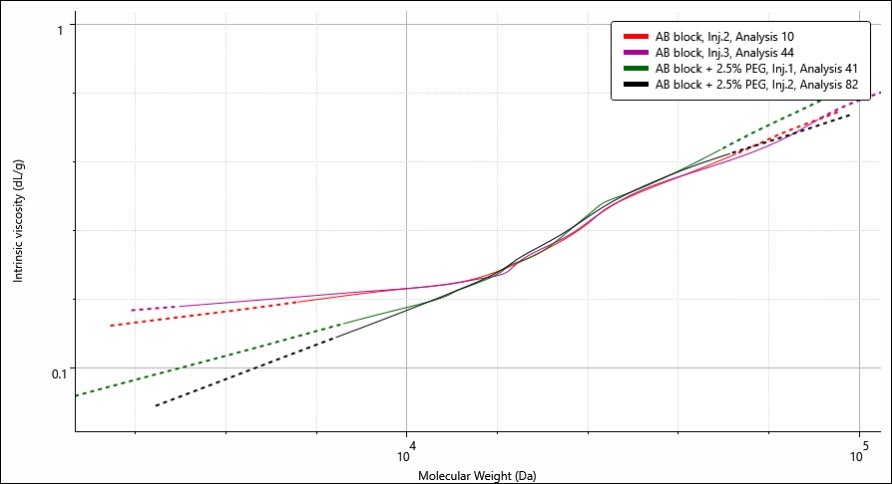 Figure 8. Mark-Houwink plot showing a comparison of duplicate injections of AB block copolymer with and without 2.5 % PEG homopolymer.

The combination of the OMNISEC REVEAL multi-detector with the Waters ACQUITY APC provides high quality, high-resolution and rapid sample analysis. The presence of the highly sensitive light scattering, refractive index and viscometer in the OMNISEC REVEAL allowed for the calculation of absolute molecular weight and intrinsic viscosity of the materials.

Rapid analysis was firstly conducted on the homo and copolymers which were characterized in terms of molecular weight, molecular weight distribution, intrinsic viscosity and size. The resolving power of the APC allowed for the detection of the presence of PEG impurities in the AB block copolymer at and greater than 5 % using the RI detector. However, no distinction was detected in samples containing 2.5 % PEG or 2.5 - 10 % PLA. Combining the molecular weight and intrinsic viscosity, Mark-Houwink plots were constructed and a clear divergence between the AB block copolymer with 2.5 % PLA or PEG and without was observed. This is incredibly important for their applications as it can cause thermoplastic elastomers to strongly deviate from the desired physical properties and drug delivery systems to drop in performance which may lead to a decrease in drug dosage and increase in side effects. This accurate characterization of the problem provides direction to tackle the issue. This shows the importance and versatility of combining the Waters ACQUITY APC and the OMNISEC REVEAL advanced multi-detection system.