The use of the Empyrean diffractometer in combination with the Oxford Cryostream Plus compact enables us to evaluate the temperature effect on the synthesis process of nanoceria using the small-angle X-ray scattering (SAXS) technique at variable temperatures.

We performed an extensive in situ study of hydrothermal synthesis of nanoceria by combination of X-ray diffraction and scattering techniques. Here we present the results of the in situ SAXS characterization of the nanoceria synthesis process in the temperature range from 5 to 90 °C.

Due to its high oxygen storage capability and remarkable redox properties, nanoceria found numerous applications including the use as a catalyst for petroleum refinement, as a polishing agent and as an electrolyte material for intermediate temperature solid-oxide fuel cells. The catalytic activity of nanoceria potentially can be utilized for the thermochemical water splitting for hydrogen production, and the treatment of some human diseases. Useful properties of nanoceria are directly influenced by size and morphology of the particles. In order to fine-tune the properties of nanoceria and to upscale the production it is essential to understand the synthesis process. We performed an extensive in situ study of hydrothermal synthesis of nanoceria by combination of X-ray diffraction and scattering techniques. Results of the time- resolved small- and wide-angle X-ray scattering (SAXS-WAXS) and the time-resolved total X-ray scattering experiments (for pair distribution function (PDF) analysis) can be found elsewhere[1,2]. Here we present the results of the in situ SAXS characterization of the nanoceria synthesis process in the temperature range from 5 to 90 °C.

A series of time-resolved small-angle X-ray scattering (SAXS) measurements at variable temperatures were performed using the Empyrean X-ray diffraction platform configured with a Cu tube, an X-ray focusing mirror, capillary spinner stage, PIXcel3D detector and Oxford Cryostream Plus compact. As a precursor for the synthesis reaction, (NH4)2Ce(NO3)6(Sigma Aldrich, > 98%) was used. For each experimental series, a fresh 5 wt% distilled water dispersion of (NH4)2Ce(NO3)6 was prepared and placed in a glass capillary immediately prior to the measurement series, so that the synthesis reaction could be monitored in real time. 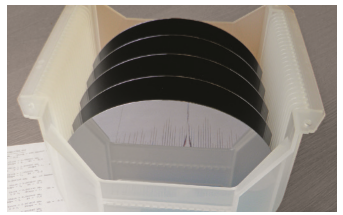 Representative SAXS curves obtained at variable temperatures from the water dispersion of (NH4)2Ce(NO3)6 are shown in Figure 2. From a comparison of SAXS curves obtained after several hours at certain temperatures we can conclude that the temperature directly influences the speed of the synthesis process of nanoceria. After 24 h at 5 ºC only the ‘broad feature’ centered at about 2º 2theta is observed. The position of the ’broad feature’ does not change with time (the same behavior was observed in the time-resolved SAXS-WAXS experimental series at room temperature [1]. The temperature increase does not significantly influence the position or intensity of the ‘broad feature’, however an additional feature, shifted towards lower values of 2theta, emerges and becomes more pronounced with time and temperature. This feature was assigned to the primary CeO2 nanoparticles [1].

The obtained SAXS curves were fitted using the PANalytical EasySAXS software assuming a bimodal distribution of hard sphere particles. Although not entirely correct in the first approximation, this approach leads to an estimate of dimensions associated with the observed features. The time-evolutions of dimensions of primary CeO2 particles and the ‘broad feature’ at variable temperatures are shown in Figure 3. Here the results of three experimental series are presented: (i) 36-hour experiment at room temperature, (ii) 50-hour experiment with three consequent temperature steps using the same sample loading, (iii) 12-hour experiment at 90 ºC. As seen from the figure, the temperature directly influences the speed of the synthesis process. At room temperature the rapid particle growth is finalized within the first 15-17 hours with the mean particle radius reaching ~4.2 nm. The particle growth is significantly faster at 90 ºC, when the mean particle radius is approaching 4.2 nm already within the first 5 hours. At temperatures below or equal to 10 ºC the size of the mean radius of CeO2-particles reached only 1.3 nm within 40 h. When temperature was increased to 25 ºC further a significantly faster particle growth was observed.

Figure 2. Representative SAXS curves obtained during monitoring of nanoceria synthesis at temperatures from 5 to 90 ºC 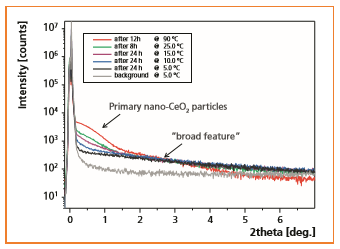 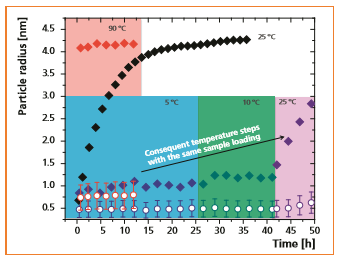 By combining an Oxford Cryostream Plus compact with the SAXS setup in air on an Empyrean diffractometer, we were able to characterize the hydrothermal synthesis of nanoceria at variable temperatures using in situ SAXS. We have shown that temperature has a direct effect on the speed of the synthesis reaction. Combining this data with the time-resolved SAXS-WAXS and PDF results provides further insight into the processes involved in the formation of nanoceria particles during synthesis from a water dispersion.