This application note focuses on the additional value of hyphenating UPLC-SEC separations with the advanced multi-detection offering from Malvern Panalytical. Applications data will highlight the analysis of absolute molecular weight (Mw), aggregate determination, and measurement of Critical Quality Attributes (CQA’s) for mAbs, fusion proteins and rAAVs.

Providing a wealth of data about macromolecule characteristics, size-exclusion chromatography (SEC) plays a critical role in the characterization of biologics and biopolymers. However, the popularity of this technique can lead to bottlenecks developing and costs mounting. The main causes of these issues are low sample throughput, high sample consumption and the limited characterization of samples.

The latest advances for the OMNISEC REVEAL ULTRA can help eliminate these bottlenecks, reduce sample volume requirements, improve productivity and extend characterization of samples required to allow improved development decisions. Efficiencies are further increased by delivering information on a level that is otherwise accessible only through the use of multiple techniques. Combining the speed of ultra-high-performance liquid chromatography (UHPLC or UPLC) with the data-rich insights of multi-detector SEC in one analytical platform, you can now run even more measurements on OMNISEC REVEAL ULTRA. Critically this technique is label-free, standard-free, and provides robust data which is underpinned by market-leading sensitivity meaning the finer details of your samples are not missed.

This application note focuses on the additional value of hyphenating UPLC-SEC separations with the advanced multi-detection offering from Malvern Panalytical. Applications data will highlight the analysis of absolute molecular weight (Mw), aggregate determination, and measurement of Critical Quality Attributes (CQA’s) for mAbs, fusion proteins and rAAVs. 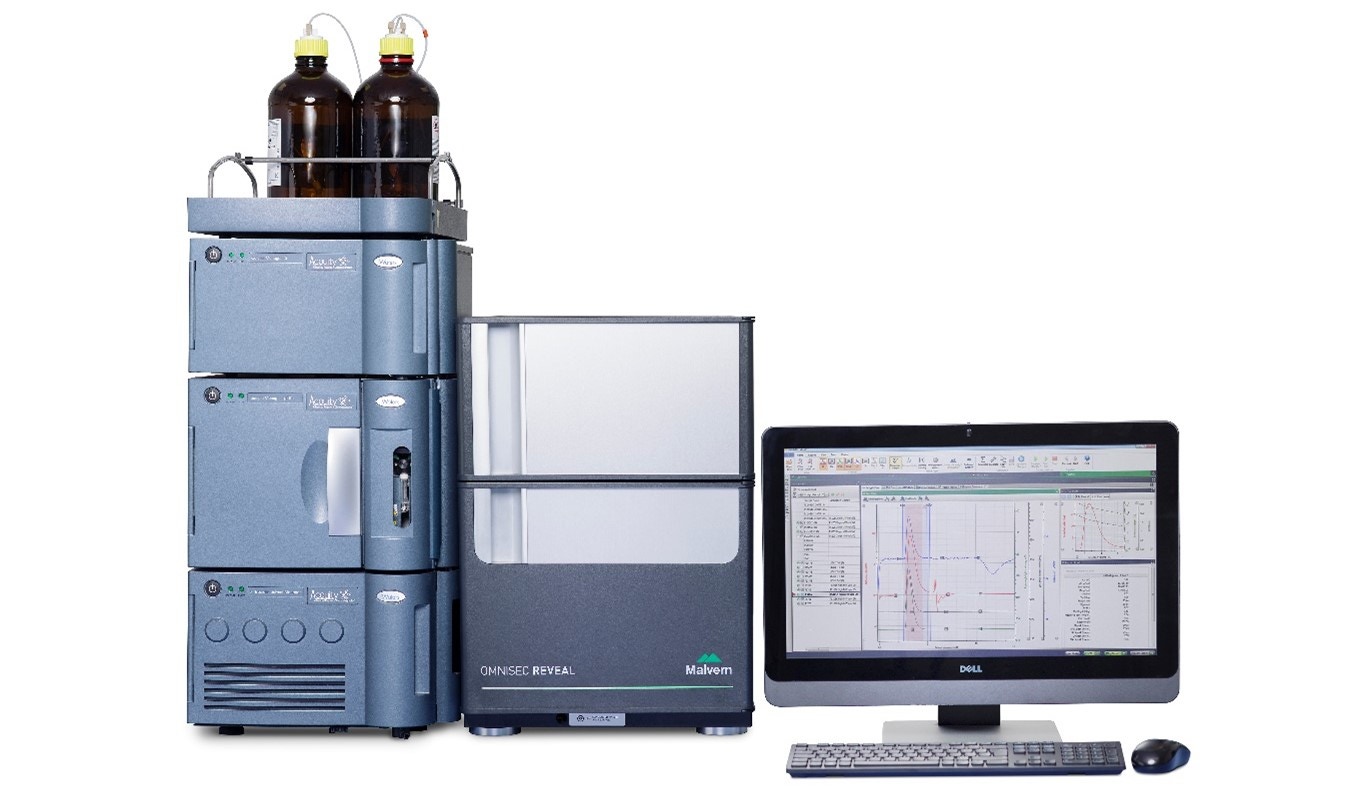 The differentiation of a UPLC system is that it uses highly efficient separations columns with a low dispersion flow path, resulting is:

Recombinant monoclonal antibodies are a key biological therapy used to treat a wide range of diseases or symptoms of an affliction in a person. During the development of these materials, it is important to understand the stability and aggregate levels as this can influence the efficacy and immunogenicity of the final product.

The traditional single detector analytical SEC approach is frequently used for the development of these materials, but relying on this approach can provide false conclusions.

Without additional information, we might make false conclusions about the production and development of these materials.

As can be seen in Figure 3 for both Bevacizumab and Adalimumab, the correct Mw is calculated when using UPLC-SEC-SLS. In addition, the fraction of sample calculated enables researchers to correctly conclude that these samples are primarily monomers of the expected form.

This can be taken further when looking at any sample which has an extended structure that is increasingly different from that of the traditional globular proteins used in column calibration methods. In this case we are looking at a fusion protein, but we could equally be investigating conjugated proteins, membrane proteins or even just the dimer of an antibody.

Etanercept is a fusion protein containing the Fc part of a monoclonal antibody and the ligand binding site of a tumor necrosis factor receptor (TNFR). This material has an expected Mw of about 125 kDa, but when we apply a traditional conventional calibration approach we calculate 498 kDa as the relative Mw.

As shown in Figure 4 when Etanercept is analyzed using multi-detection with both static light scattering for absolute Mw and a differential viscometer for size analysis, the expected results are calculated. Importantly the radius of the Etanercept monomer is 6.5 nm. In comparison, Bevacizumab has a radius of 5nm with a size to Mw relationship similar to that of column calibration standards. This size difference explains why the relative Mw for Bevacizumab is closer to reality than that of Etanercept and highlights the caveats of the traditional calibration approach. 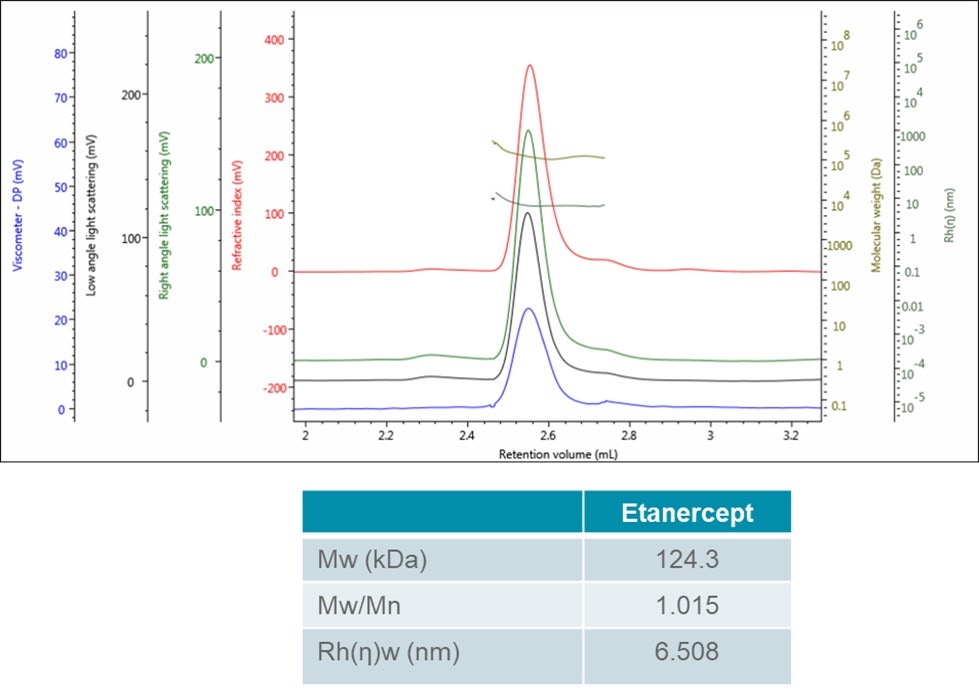 As well as allowing us to explain the results we have obtained, the radius measurement also allows researchers to monitor protein folding and assess large quaternary structural differences between samples.

Gene therapy and rAAV’s are of increasing interest due to the relative safety, long term gene expression and multiple available serotypes that have different tissue specificity. OMNISEC allows numerous CQA’s for rAAV development to be derived in one run, offering key advantages of being serotype independent, calibration free and a rapid analysis.

The advantages and methods are discussed in detail in the application notes (The importance of Multi-Detection SEC in gene therapy) and webinars (Accelerating AAV analysis) on the Malvern Panalytical website.

Importantly the methodologies which have been previously shown to be highly effective on an OMNISEC system can be transferred to a UPLC-REVEAL ULTRA without loss in data robustness. This brings the advantage of minimizing sample consumption to the important derivation of rAAV CQA’s.

Shown in Figure 5 are the results obtained for an rAAV5, with the results shown for the highlighted area which is expected to contain a mixture of full and empty rAAV5. 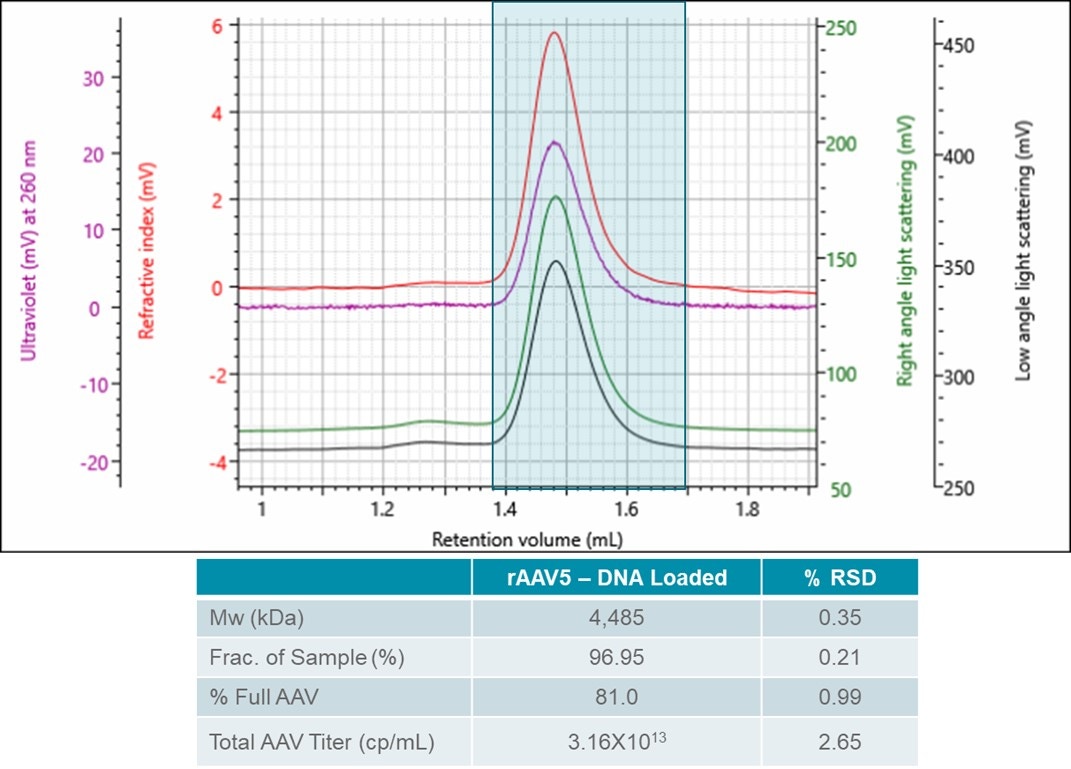 Figure 5: UPLC-REVEAL ULTRA results for rAAV5 which is expected to be DNA loaded.

The results table reports the key data from this analysis. Excellent %RSD is reported for these results when 6 injections of the same sample have been measured. The Mw of the sample can be calculated and is higher than would be expected for an empty capsid immediately suggesting this sample is loaded with DNA. The faction of the sample in the highlighted area is 96.95%, confirming the sample contains limited aggregated or fragmented material. The sample contains 81% of rAAV5 which are full of DNA, the remaining 19% are empty. In addition, the sample titer can be easily calculated directly. Importantly the data in Figure 5 matches that collected using the OMNISEC system following a standard HPLC-SEC approach.

One of the key questions to ask of an analysis is how robust it is when samples are altered and if the results can be trusted. To investigate the robustness of the analysis, known mixtures of full and empty rAAV5 and rAAV9 were mixed in controlled ratios. Using known mixtures meant that we knew the expected loading of a population and could correlate that with the results obtained from the analysis.

Figure 6: Graphs showing the relationships between the measured and expected % full rAAV’s calculated for rAAV5 and rAAV9.

The graphs in Figure 6 show an extremely good relationship between the measured and the expected % full rAAV. This fantastic correlation helps confirm the robust analysis which is being performed on the UPLC-REVEAL ULTRA system for rAAV samples.

Importantly it is not possible to determine the CQA’s for rAAV development by using a UV-only system. The inclusion of multi-detectors to a UPLC separation not only provides the CQA data but also minimizes the sample consumption of materials which can prove challenging to isolate in large quantities.

When the relative molecular weight results are relied upon this can lead to false conclusions in the production and development of materials. Using incorrect column calibration data could lead researchers to conclude that a sample has lost a part of the polypeptide chain or has an impurity or has aggregated or is as expected, when in fact there is a flaw in the methodology of analysis and the results generated are not reflecting the reality of the sample. Using Multi-detection in the REVEAL ULTRA eliminates this uncertainty in the results generated.

As well as this, key data for more complex samples, where the available mass of material is a limiting factor, can be generated in a robust and reliable way in one and the same run, avoiding the need for the use of multiple techniques, thus saving time and sample and reducing the risk of error.

By combining the advantages of UPLC-SEC separations with the multi-detection approach it is possible to unblock the development path of biopharmaceuticals and ensure better products are delivered to market.