With the latest innovations in X-ray tube and detector technology in the Epsilon 4, this system, in combination with the Eagon 2 fully automatic fusion system, complies with the latest cement testing methods of both ASTM C114-15 and ISO 29581-2.

The data presented in this datasheet clearly demonstrate the compliance of the Epsilon 4 XRF spectrometer, in combination with the Eagon 2 automatic fusion machine, with both the ASTM C114- 15 and ISO 29581-2:2010 cement test methods for the quantitative analysis of SiO2, Al2O3, Fe2O3, CaO, MgO, SO3, K2O, Na2O, TiO2, P2O5, ZnO and Mn2O3 in cement, prepared as fused beads.

X-ray fluorescence spectroscopy (XRF) has an important and well-established analytical role within the cement industry. It is used extensively for production and quality control for the elemental analysis of raw materials, alternative fuels and finished products. Low-power benchtop energy dispersive XRF instruments (EDXRF) were never considered a reliable analytical tool in this environment, since they could not satisfy the relevant international ASTM and ISO cement test methods. With the latest innovations in X-ray tube and detector technology in the Epsilon 4, this has changed. This system, in combination with the Claisse Eagon 2 fully automatic fusion system, complies with the latest cement testing methods of both ASTM C114-15 and ISO 29581-2, in 10 minutes.

ASTM C114-15 gives recommendations for the maximum deviation of analytical results for a selection of important compounds in cement. In brief, the norm suggests that the analyses must be made in duplicate on different days. Two criteria apply, one for the differences between duplicates measured on different days and one for the differences between the averages of the duplicates and the certified values.

ISO 29581-2 specifies the limits for accuracy and repeatability of the analysis of compounds in cement samples. The limits are specified in two performance levels: ‘normal’ and ‘expert’.

A PANalytical Epsilon 4 spectrometer was used to carry out the measurements. The system is equipped with a 15W, 50 kV silver anode X-ray tube, 6 software selectable filters, a helium purge facility, a high- resolution SDDUltra silicon drift detector, a spinner and a 10-position removable sample changer. The applied measurement conditions are shown in Table 1, with a measuring time of 10 minutes per sample. Net intensities were derived from the acquired spectra by deconvolution, except for Na, which was obtained by region of interest (ROI).

A Claisse Eagon 2 fully automatic fusion machine was used to prepare the fused beads. The innovative 2-position design combines the advantages of gas burner and muffle furnace technologies in a system that does not require hazardous and costly gas supplies, cooling water or compressed air. The Eagon 2 only requires a simple electrical connection. Its fully automatic, push-button operation ensures a high level of repeatability and ‘cold to cold’ operation for safety at all times.

The Epsilon 4 is a fully integrated energy dispersive XRF analyzer consisting of a spectrometer, 10-position sample changer with integrated spinner and mature software. Powered by the latest advances in excitation and detection technology  the Epsilon 4 is a star performer in the benchtop instrument class. A high-resolution SDDUltra silicon drift detector, a well-designed optical path and a wide range of excitation capabilities contribute to the Epsilon 4’s uniqueness

Figure 1. Calibration graph of Fe2O3 in cement CRMs, prepared as fused beads (red dots represent the excluded standards, according to the test methods) 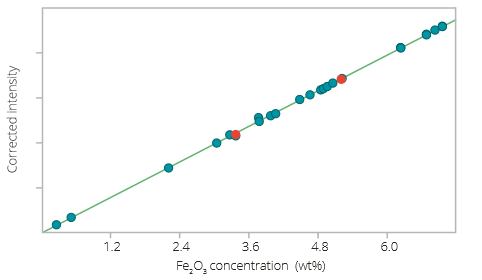 Figure 2. Calibration graph of Na2O in cement CRMs, prepared as fused beads (red dots represent the excluded standards, according to the test methods 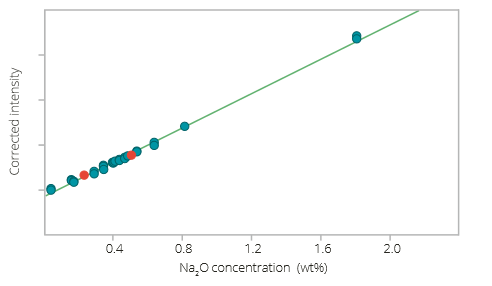 Eight international NIST Portland SRM ce- ment reference materials were selected to produce two sets of fused bead samples to demonstrate instrument and sample preparation performance. These sets were prepared and measured on different days. The difference between the measurements on both days is a measure of the overall precision of the method, while the differ- ence of the average of the values from both days to the certified values is a mea- sure of the overall accuracy of the method.

that the Epsilon 4 meets ASTM C114-15 requirements for SiO2, Al2O3, Fe2O3, CaO, MgO, SO3, P2O5, K2O, Na2O, TiO2, Mn2O3 and ZnO in cement samples prepared as fused beads. The results of the duplicate test are illustrated graphically in Figure 3 for SiO2 and the results of the accuracy test are illustrated graphically in Figure 4. 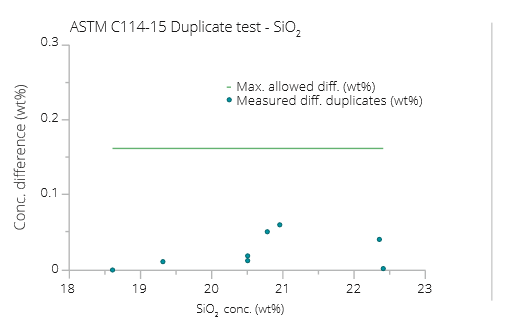 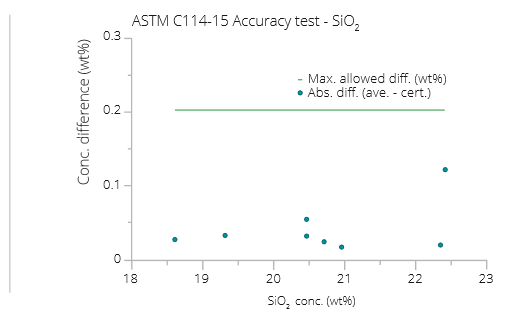 In accordance to ISO 29581-2, NIST 1888b and JCA XRF 13 were measured as unknowns and those standards were not included in the calibration graphs. The measured concentrations were compared to the certified values. Table 3 presents the accuracy results obtained for these two validation samples by showing the difference between the measured and the certified values, and the maximum difference allowed by the ISO norm. The repeatability of the method was tested by measuring NIST 1881a validation samples  for ten times over a period of six days.  The results are shown in Table 4 and graphically illustrated for SiO2 and Al2O3 in Figures 5 and 6, respectively. Both ‘normal’ and ‘expert’ performance levels are shown in the graphs for comparison. 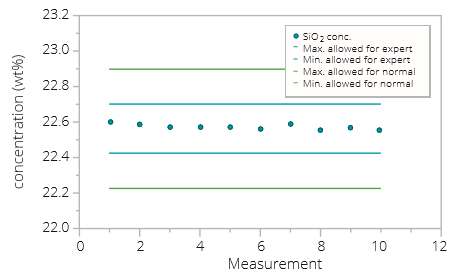 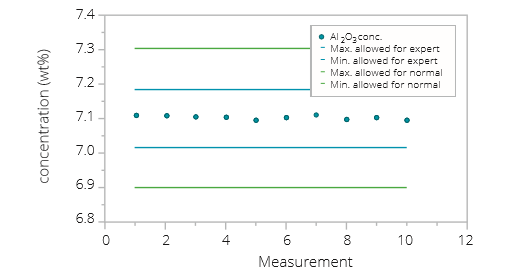 Table 3. Summary of the accuracy test obtained for two validation samples according to ISO 29581-2 limits

Table 4. Summary of the repeatability test obtained for NIST SRM 1881a according to ISO 29581-2 limits

The data presented in this application note clearly demonstrate the compliance of the Epsilon 4 XRF spectrometer, in combination with the Eagon 2 automatic fusion machine, with both the ASTM C114-15 and ISO 29581-2:2010 cement test methods. Quantitative analysis of SiO2, Al2O3, Fe2O3, CaO, MgO, SO3, K2O, Na2O, TiO2, P2O5, ZnO, SrO and MnO3 in cement, prepared as fused beads was performed in 10 minutes.