This application note describes the analysis of sulfur contents larger than 0.10 wt% in crude oils, according to international standard ISO 8754, using the Epsilon 4.

Analyzing sulfur content in crude oil and fuels is a crucial requirement, not only as a quality control procedure  to  comply with standards or to monitor detrimental effects on engine performance, but also to comply with the large number of environmental regulations.

A series of commercially available sulfur in crude oil standards, from PANalytical in cooperation with VHG Labs, were used to set up the calibration for the determination of sulfur in petroleum products. Seven and a half grams of each oil standard were poured into a 15 ml liquid cell, assembled with a 3.6 µm Mylar supporting foil. Mylar was chosen because of its robustness for gasoline and diesel samples.

The measurement condition for sulfur in crude oil is given in Table 1. All analyses were performed in air and the total counting time per sample was 100 seconds. Figure 1 shows the XRF spectra of eight standards with sulfur concentrations of 0.10, 0.25, 0.50, 1, 2, 3, 4 and 5 wt%.

Figure 2 shows the calibration graph for sulfur in crude oil. A good correlation between the certified concentrations and the measured intensities is demonstrated. Table 2 lists the correlation coefficient and the root mean square (RMS). 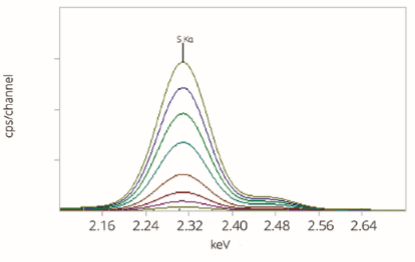 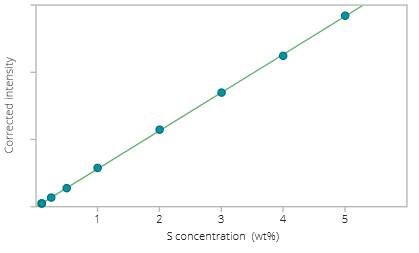 Table 3. Results of the repeatability test

Measurement precision is an important aspect of analysis and good precision is an inherent characteristic of the Epsilon 4 spectrometer. The repeatability requirement of ISO 8754  states that, for test results obtained by the same operator  with  the same  apparatus  under  constant  working   conditions   on   identical test material, test results should not exceed the given limits for more than one case in twenty. The test method limit specified in ISO 8754 can be derived using the equation:

where x is the average of the results of the sulfur contents being compared.

To test the precision of the instrument, one sulfur (0.21 wt%) in white oil sample was measured 20 times consecutively. A newly prepared cup was used each time.

The results of the repeatability test for sulfur, including  the  largest difference between two measurements and the maximum permissible difference according to ISO 8754 standard are presented in Table 3.

Figure 3 illustrates the allowed difference between two measurements and by that the high degree of precision achieved. Epsilon 4 easily meets the repeatability criteria at a level of 0.21 wt% sulfur, even without use  of  helium.  Hence  demonstrating  that the Epsilon 4 is capable of satisfying more stringent, future sulfur regulations.

Figure 3. Repeatability measurements of preparing and measuring 0.21 wt% sulfur in white oil samples according to ISO 8754. Dashed lines indicate the precision set in the method. 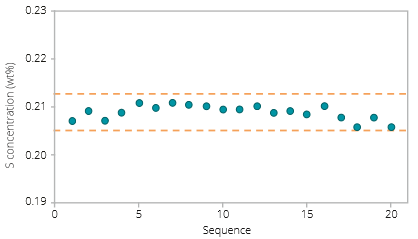 The results demonstrate that the Epsilon 4 EDXRF spectrometer is capable of analyzing sulfur according to ISO 8754 standard. The high detector resolution and sensitivity, together with the powerful software contribute to accurate and precise results. In addition, because of its versatility, Epsilon 4 is well suited for other applications such as sulfur in biofuels and additives in lubricating oils.