Polymorphic conversions are an ongoing problem in the pharmaceutical industry. Here we describe the use of Morphologically-Directed Raman Spectroscopy (MDRS®), available on the Morphologi® ID, to distinguish and quantify particles of different polymorphic types of acetaminophen (paracetamol) within a mixture. MDRS is a flexible tool for root cause analysis, product quality and formulation development and is well-suited to identifying even low-level polymorphic contamination.

Interest in studying mixed systems of pharmaceutical relevance is not a new concept.  From intrinsic polymorphism to complex final products, the challenges encountered by modern analytical scientists have multiplied both in number and in complexity.  Established techniques are often unable to provide both separation and identification of species in a mixed system, as they are used to probe chemistry (bulk spectroscopy), or individual particle characteristics (microscopy and SEM).  Combining techniques capable of analyzing micron-scale particulates with absolute chemical specificity provides a new window into describing the complicated mixtures common in today’s competitive pharmaceutical market.

Malvern Panalytical’s Morphologi® ID provides just such a technology combination, uniting automated microscopy and spectroscopy in an integrated package. This partnering of techniques has been termed Morphologically-Directed Raman Spectroscopy (MDRS®).  Raman spectroscopy is sensitive to the unique polymorphic forms of a substance, and can be used to investigate single particles to assist in determining the long-term stability of a product.  Correlations may be established between morphological and spectroscopic results, where morphologically-distinct particle groups are found to share common spectra, and vice versa.  The ability of MDRS to target particles of distinct morphology for Raman investigation provides added sensitivity to the measurement, as spectra for particles that are not of interest are not measured.  Likewise, knowing that a group of particles with similar spectra may be described by a common morphology allows the analyst to assess particulate quantity in the absence of measuring a spectrum for each particle in the morphologically-similar group.  Such correlations between particle morphology and chemical identity allow MDRS to provide an improvement in efficiency over manual methods.

A polymorphic mixture of common pain-relief medication was investigated using a Morphologi ID instrument to characterize samples in terms of particle size, shape, and chemical identity. The polymorphic mixture consisted of the Type I and Type II polymorphs of acetaminophen (also known as paracetamol). Acetaminophen in its Type I form (Fisher (98%, AC102332500)) was recrystallized by slowly cooling a saturated solution in water at 60 °C1.  The resulting material was recovered and dried at 75 °C for eight hours, at which point half of the sample (Type I) was removed and the other half heated to 170 °C to effect the Type I to Type II polymorphic conversion2. A volumetric fraction consisting of 9 parts Type I to 1 part Type II by weight was milled for 1 minute in a hand mill.  3 mm3 of the resulting mixed powder was placed into the dry dispersion accessory for the Morphologi ID instrument and dispersed at a pressure of 4 bar onto a quartz plate.

A 20 mm diameter area was scanned at 5x magnification to detect acetaminophen particles, and 1375 particles were selected for Raman measurement based on the following size categories: greater than 50 μm, 25 μm to 50 μm, and 10 to 25 μm.

Reference spectra for Raman analysis were obtained from pure materials.  Spectra were collected with a 785 nm laser (20 mW) illuminating a 3 μm spot size at 50x magnification, and covering a range from 150 cm-1 to 1850 cm-1 at 6 cm-1 resolution.

Over 70,000 individual particles were detected for the 9 (Type I):1 (Type II) acetaminophen mixture.  The sample was polydisperse, with some particles greater than 400 μm detected.  Examples of the particles analyzed and their final size distribution are shown in Figure 1.

The morphological results show that the hand mill produces a broad distribution of particle sizes. It is also apparent that a few large particles (greater than 200 μm) are still present in the final dispersion.  The size distribution result is used to classify the particles based on size (10 μm to 25 μm, 25 μm to 50 μm, and greater than 50 μm) for Raman investigation.  Particles below 10 μm were excluded from Raman analysis.

The results of correlation against the library of pure polymorph spectra revealed 1220 Type I particles and 144 Type II particles, out of 1375 particles targeted, corresponding to 10.5% Type II polymorph.  The pure reference spectra and examples of particle spectra are shown in figure 2. The correlation was constrained to contain only the 1200 cm-1 to 1260 cm-1 and 1540 cm-1 to 1590 cm-1 regions (indicated by the green areas in figure 2) where the two species are readily distinguishable.  A correlation score of greater than 0.85 was required for a positive identification as either Type I or Type II.  Mixture spectra (correlation to both Type I and Type II references with scores greater than 0.85) were detected for 11 particles, an example is also shown in figure 2. 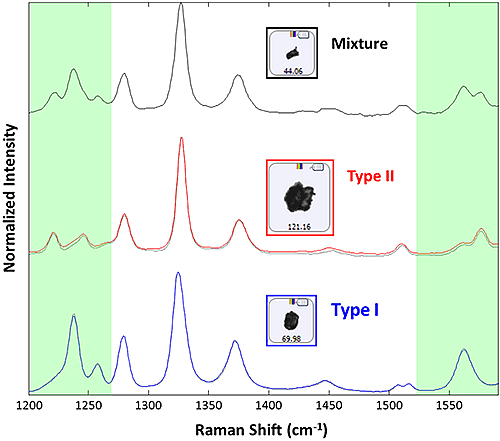 Figure 2: Raman spectra collected from example particulates for acetaminophen Type I (blue), acetaminophen Type II (red), and a mixture spectrum (black).  The Type I and Type II spectra are superimposed over reference spectra used to create the library (black dotted).  The portions of the spectrum in green are those used for correlation to the reference library.

The agreement between the recorded and library spectra is outstanding, and allows for simple discrimination between the two polymorph types within the confines of the correlation analysis.  The mixture spectra identified for a subset particles are most likely due to the formation of aggregates during dispersion.

Once the spectroscopic data is available, the morphologies of the two species can be reviewed to determine if it is possible to segregate similar looking materials based solely on their morphologies.  In the present example, results confirm that the Type I particles have a higher Intensity Mean than the Type II particles, meaning that Type I particles are more transparent, as shown in Figure 3. However, whilst a clear difference in the transparency of the two particle types exists it should be noted that there is some overlap between the Intensity Mean distributions, which suggests that it is not a definitive morphological separator.    No other morphological descriptors indicated a significant difference between the particle types, most likely due to loss of morphological information during the milling process.  This situation emphasizes the importance of having a “referee” technique, such as Raman spectroscopy, available to discriminate between different chemical species. 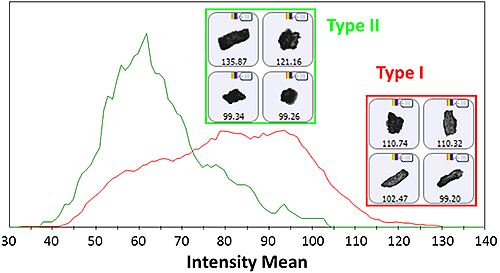 Figure 3: Intensity Mean distribution for the Type I and Type II particles as determined by the Raman spectroscopic results.  Insets display example images of particles from each group.

Polymorphic conversions are considered an ongoing problem in the pharmaceutical industry.  Process conditions, improper storage, and simply time can cause the transition from a stable, efficacious form of a drug substance into an unwanted structural analogue.  Thus, establishing the presence of multiple polymorphic forms is of great interest to both innovator and generic pharmaceutical companies alike.  Vibrational spectroscopy has found wide use as a tool with the requisite sensitivity to establish the presence of multiple polymorphic forms in a mixed system.  Unfortunately, commonly-available bulk spectroscopic techniques lack the sensitivity to detect the low levels of polymorphic contaminants that may be present in final products.  Additionally, bulk techniques provide only an overview of the material that is present in the sample area, and have no ability to partition the sample into individual particles to provide specific characterization.

MDRS provides clear advantages over traditional methods of vibrational spectroscopy, and is well-suited to address low-level polymorphic contamination directly.  Spectra are collected for single particles, which allow at least an order of magnitude increase in detection sensitivity.  Data collection can be conducted for any number of particulates desired, and unique spectra are easily identified.  As mentioned previously, the morphological characteristics of particulates can also be used to further refine the selectivity of the method.  If different polymorphic forms have distinct morphology, the method can be modified to investigate only those that fit a particular morphological profile.  These strengths position MDRS as a technique that can handle the most difficult polymorphic mixtures with unparalleled sensitivity and flexibility, providing a new tool for root cause analysis, product quality, and formulation development.