Ceramic granules are often the preferred method for handling fine ceramic powders during production processes. Granule sizes and shapes are selected to optimize powder flowability and particle packing. The size and shape of ceramic granules produced by spray-drying methods can be controlled by adjusting the process. The Morphologi® automated image analysis system can be used to aid fine-tuning of the spray drying parameters by providing efficient particle size and shape characterization.

From the humble cereal bowl to the intricate electronic components in your mobile phone and even body armor, ceramics are found in a diverse range of industries and applications. Despite their wide range of applications, they are all are produced in a similar way: by pressing and then firing powders produced using a spray drying technique. Spray drying converts ceramic slurries into free-flowing spherical powders with a narrow particle size distribution.

Fine material is desirable in the manufacture of ceramics as this leads to a high packing density, resulting in low shrinkage when the ceramic part is baked; although fine material is also more cohesive and can give poor flowability. Furthermore, dry blending of the raw ceramic material and additives may lead to segregation of the different components which can be problematic.

To avoid such issues the mixture is usually blended in a slurry to give a homogeneous product before spray drying. In the spray drying process the feed slurry is atomized into tiny droplets by using either a nozzle or rotary atomizer. The atomized spray is then mixed with hot drying gas, which causes droplet evaporation to form the powder. The dried product is then used to manufacture the ceramic components.

Although there has been a lot of research into what makes a good slurry, there has been comparatively little work done on the granular product. While particle size is a critical performance metric governing the mechanical properties of the ‘green body’ and fired ceramic, the proportion of fine material and presence of irregular particles also strongly influence the fluidity and malleability of the final product.

As particles become smaller, the inter-particle forces of attraction between them increase, whilst being simultaneously subjected to lower gravitational forces. Consequently, finer particles flow less freely under gravity than coarser material. Similarly, irregularly shaped particles are subjected to greater frictional forces and so would also be expected to exhibit reduced flowability [1].

Thus, knowledge of the relationship between the size and shape of the granular material and the properties of the final product can be used to optimize the manufacturing conditions and resultant particle properties. In this application note we explore the use of the Morphologi® in evaluating the size and shape of granular particles obtained from a spray drying method. This work was done in collaboration with Preci Corporation, whose spray dryer is shown in Figure 1 [2].

Two test samples, Al2O3 and W/Ni/Fe-based particles, were prepared via the spray drying method [TR160, Preci Corporation, Japan] to nominally the same particle size, using the equipment shown in Figure 1. Both samples were dispersed using the automated Sample Dispersion Unit (SDU) on the Morphologi using a dispersion pressure of 1.0 bar. The resultant dispersions were analyzed using the 5X objective and the size distributions compared. The shape of the particles were also analyzed and compared in terms of a circularity index. In this case, only particles with a CED >10 microns were considered, to ensure that the comparison was conducted on particles of the same size. 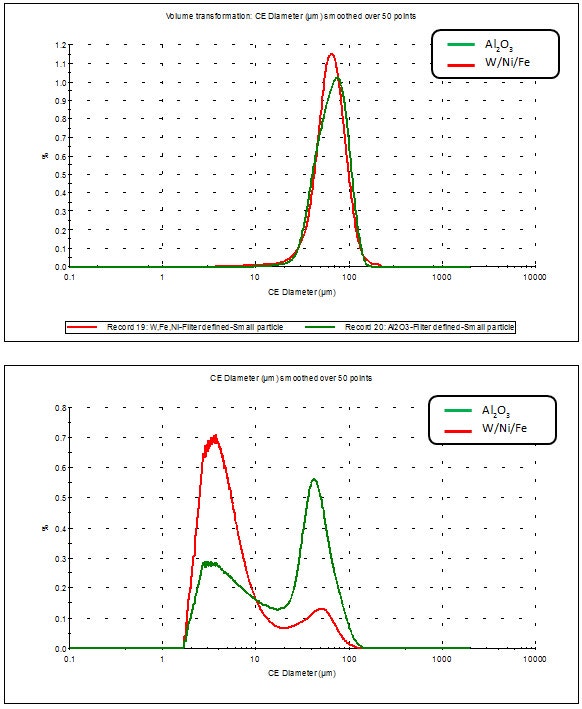 In this case, fines are defined as particles with a circular equivalent diameter (CED) of <10 microns. As Figure 3 shows, the proportion of fine material can thus be quantified using this principle, with a larger proportion of fines in the W/Ni/Fe sample. 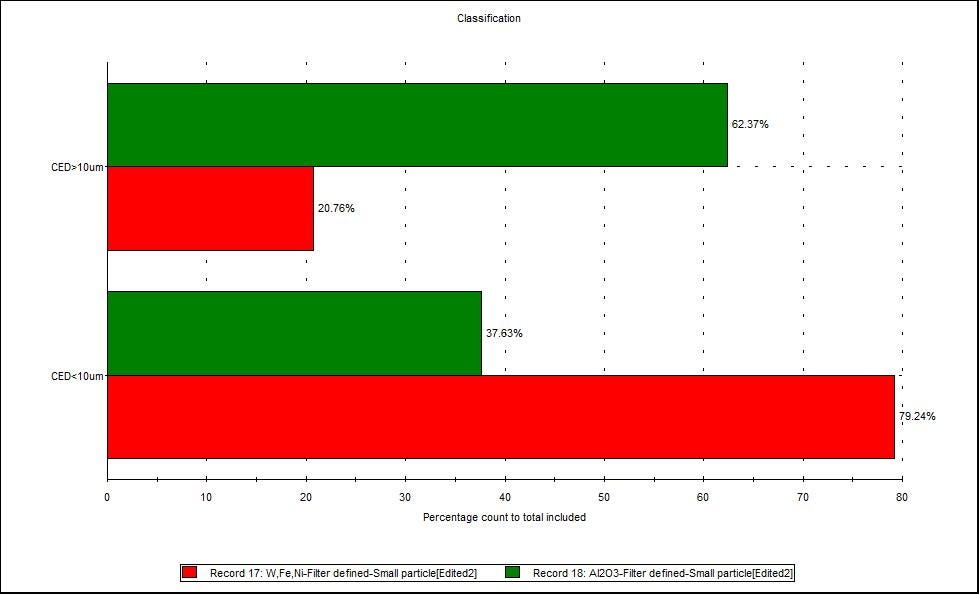 Figure 4 shows the circularity measurement results for the two samples, with an HS circularity value of one indicating spherical particles and decreasing values less than one a greater degree of particle irregularity. Based on the results reported, the Al2O3 sample appears to contain more circular particles than the W/Ni/Fe sample. 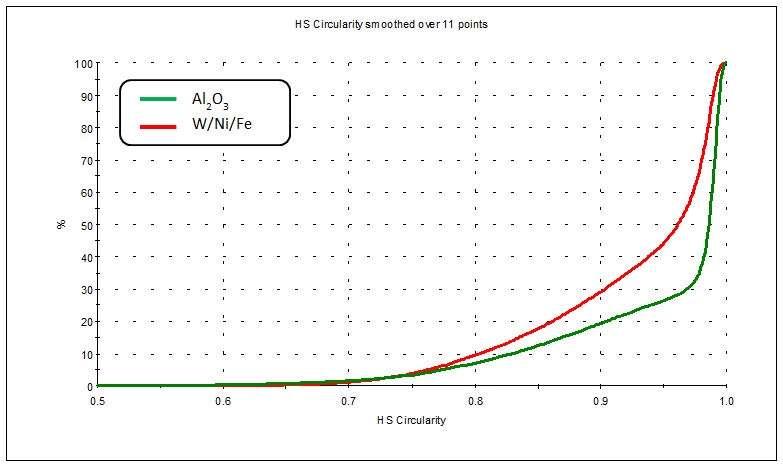 Thus, independent of any size differences, the alumina particles are more rounded than those of the W/Ni/Fe sample. The example images in Figure 5 of particles around the mean circular equivalent diameter (CED) of both samples further illustrates the size and shape differences between the two samples - those of W/Ni/Fe are smaller and more irregular in shape.

Figure 5 – Particle images around the CED mean of each sample

The results from this study have demonstrated that the W/Ni/Fe sample contains a greater proportion of fine material and irregular particles than the alumina sample. Therefore, we would expect the alumina sample to exhibit greater flowability and malleability when used to manufacture ceramic materials. By monitoring the size and shape of the granules produced by spray drying slurries, it is possible to adjust the manufacturing conditions to obtain powders with optimal characteristics.