X-ray fluorescence spectrometry is used extensively for geochemical analysis. The main reasons for this are simple sample preparation, high accuracy and precision and good to excellent detection limits across large parts of the periodic table.

Organic-rich materials have a variety of uses as fuels, for example coal, petroleum coke and biomass, together with a range of waste materials used as alternative fuels; and as fertilizers, for example compost and sewerage sludge. Accurate trace element analysis of these materials is becoming increasingly important as governments tighten regulations to minimize and control contamination and environmental pollution and promote the use of renewable sources of energy.

Organic-rich materials have a variety of uses, particularly as fuels and fertilizers. Coal, petroleum coke and biomass, together with a range of waste materials, are often used as alternative fuels in cement production and other industries. Compost, on the other hand, is used as a fertilizer in both the private and commercial sectors. Accurate trace element analysis of these materials is becoming increasingly important as governments tighten regulations to minimize and control contamination and environmental pollution and promote the use of renewable sources of energy. Some industries are expected to replace up to 20% of their traditional fuels by biomass by 2010. This means that large quantities of samples will need to be analyzed during process control and in environmental laboratories when conformity to governmental regulations is required.

Sample preparation difficulties and the scarcity of suitable reference materials make the analysis of these types of materials challenging.

X-ray fluorescence spectrometry is used extensively for geochemical analysis. The main reasons for this are simple sample preparation, high accuracy and precision, and good to excellent detection limits across large parts of the periodic table. These benefits also apply to organic-rich samples, for which average detection limits for most elements of agricultural and environmental importance are well below 1 ppm in a typical, high-power WDXRF. However, to achieve accurate quantification of trace elements close to these limits requires accurate, spectrally clean net peak intensities, accurate corrections for inter-element matrix effects and good standards.

The Zetium spectrometer with Pro-Trace software and standards make up a unique package that offers a complete solution for trace element analysis in a wide variety of organic-rich materials, including coals, secondary fuels (wood, poultry litter, palm kernels), agricultural products (corn, wheat, orchard leaves) and waste matter such as sewerage sludge, without the need for ‘in-type’ standards.

To demonstrate the performance of this system, 9 elements were selected as representative of the suite of elements that can be calibrated with the Pro-Trace standard.

These elements range across the periodic table and illustrate a variety of analytical situations. For example, the use of K- and L-lines; the position of peaks on curved or linear backgrounds; elements suffering strong line overlaps; and for some elements the necessity to ‘jump’ major element absorption edges to make mass attenuation coefficient corrections.

A special set of standards consisting of 25 pressed powder multi-element standards, blanks and two monitors for 40 trace elements is available from PANalytical. The Pro-Trace standard set has two calibration standards for each of the 40 trace elements, and each standard is validated against more than 200 internationally certified reference materials.

Alternatively, a laboratory can use its existing standards and/or prepare additional standards to match its specific requirements. The preparation of routine samples is easily mastered, safe and relatively inexpensive.

Oven-dried samples are pulverized for ~20 minutes in a planetary ball mill together with 20% wax/styrene additive. The additive acts as a binder and a grinding agent, resulting in a uniform grain-size distribution. Soft materials, such as leaves, wood and textiles, that are difficult to pulverize by impact milling, may need to be pre-treated in a rotary grinding mill before mixing with binder. Approximately 12 g of the sample/ binder mixture is then pressed into 40 mm diameter pellets using a hydraulic press operated at 20 tonnes pressure.

Precision and instrument stability The precision, repeatability and reproducibility of the Zetium spectrometer in combination with Pro-Trace is impressive, not only  for short-term measurements (consecutive measurements, Table 1), but also for longer-term measurements carried out over a period of ten days. For comparison, the counting statistical error (CSE) is also shown in Table 1.

In this case 20 consecutive measurements of a sample, unloaded between measurements, delivers standard deviations better than 1-2% relative at the 15 ppm level, e.g. Cu, Pb and Zn. More importantly, this level of precision is maintained for measurements carried out over a period of 10 days, demonstrating the long- term stability of the system. Figure 1 gives a graphical illustration of the analytical precision for lead and arsenic measurements in a coal sample.

Analyses are based on two-point calibration lines (Pro-Trace standards) constrained through the origin (Figure 2). Pro-Trace calibration standards are shown as (+), and the crosses (x) are international CRMs analyzed as unknowns. The  quality of the data (Table 2) results from the combination of the Pro-Trace software that produces accurate net peak intensities, together with the high accuracy of the Pro-Trace setup standards. A calibration plot for lead (Figure 2) gives a graphic illustration of the accuracy of the system, and the CRM data (x) show no systematic error or bias 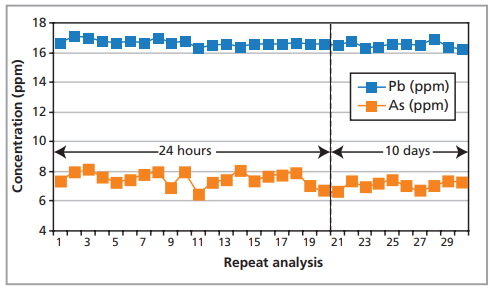 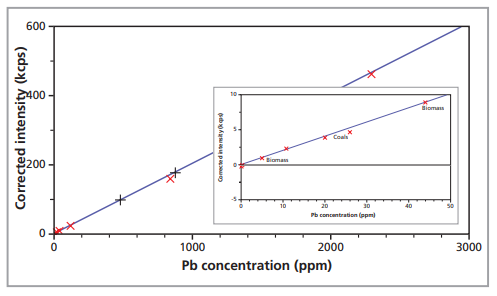 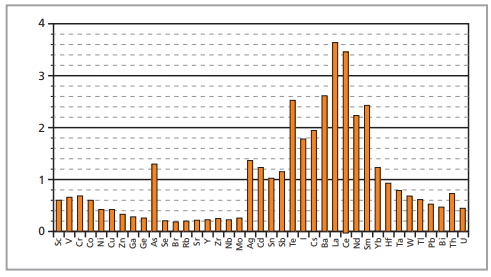 Detection limits for the elements studied are given in Table 3. Figure 3 shows detection limits lower than 1.4 ppm for the majority (31 out of 39) elements between scandium and uranium using the Zetium and Pro-Trace combination. The other 8 elements are measured on their L emission lines and thus suffer from less than optimal sensitivity. Arsenic was determined using the Kα line, hence the higher LLD compared to the neighboring elements. The LLDs for more than half of the elements are lower than 0.7 ppm.

Pro-Trace is designed to give the best performance by using proper and proven procedures for:

• Fast, accurate trace-element analysis with LLDs below 1 ppm for many elements

• Reliable LLDs and counting error for every element in every sample

• Good-quality trace-element data is achievable, even with only two calibration standards. 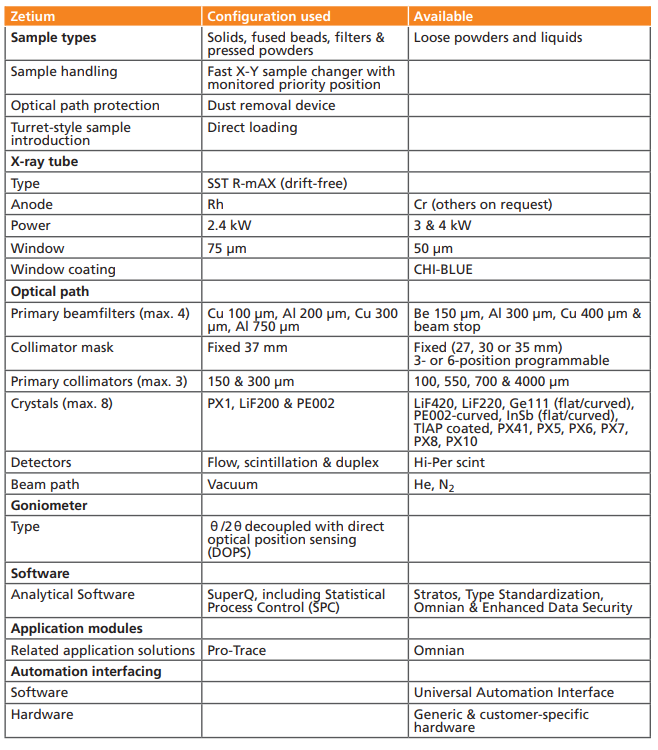 The Zetium and Pro-Trace system is capable of measuring all elements (B - U) in organic-rich matrices with significantly improved limits of quantification. Measurements are accurate and precise and the method benefits from simple, essentially hazard-free, sample preparation. Furthermore, the stability of the Zetium is such that individual calibrations can be used for months. Time-consuming recalibrations are unnecessary and the resultant data are highly consistent over time. Zetium with Pro-Trace is a unique solution for trace analysis of organic-rich materials, without the need for ‘in-type’ standards. Together they consistently produce very high-quality trace element data from simple routine measurements with high sample throughput.