Malvern Panalytical’s X‘Pert³ MRD and Empyrean are high-precision, flexible and easy-to-use multipurpose diffractometers. Their dual diffracted beam paths are designed to enable a seamless transition between applications. In combination with a motorized sample stage, both sample alignment and data collection can be realized in a single customizable user batch. Furthermore, with a suitable software package, the routine data analysis starts from a single button click.

In recent years ZnO has become an important material in a variety of applications including solar energy conversion, piezoelectric nanogeneration and as a photocatalyst. The physical performance of fabricated functional electric devices containing ZnO is strongly related to the orientation and dimensions of films and particles within the structure. Exploring its unique electrical, optical and piezoelectric properties, requires structural characterization to be performed alongside device performance so that the ZnO growth processes can be optimized.

In recent years ZnO has become an important material in a variety of applications including solar energy conversion, piezoelectric nanogeneration (for wearable devices) and as a photocatalyst. The physical performance of fabricated functional electric devices containing ZnO is strongly related to the orientation and dimensions of films and particles within the structure. As a typical example, ZnO shows a variety of nanostructures ranging from nanolayers, nanowires, nanotubes and nanosprings. Exploring its unique electrical, optical and piezoelectric properties, requires structural characterization to be performed alongside device performance so that the ZnO growth processes can be optimized.

A piece of 5 x 5 mm2 ZnO thin film grown on a glass substrate is used for this study. The ZnO layer is expected to have a preferred orientation with (00L) planes parallel to the sample surface. Due to the growth process the ZnO layer is subject to stress.

Measurements were performed using a Goebel-type parallel beam mirror on the incident beam side. On the diffracted beam side dual beam path setup was used with a PIXcel3D area detector on the primary beam path and a Xe proportional point detector attached to a parallel plate collimator.

Following automatic sample alignment using a program in the Data Collector software, X-ray reflectivity curves were collected. This combined process took about 8 minutes. A fast symmetric scan using the PIXcel3D area detector on the primary diffracted beam path was also performed in order to index the lattice planes that are parallel to the surface. A polycapillary X-ray lens was used for stress measurements and pole figures since it provides a very high-intensity parallel beam with variable spot size.

Figure 1. Top left: A picture of the ZnO sample and a hexagonal crystallographic structure. Top right: The X-ray reflectivity curve reveals a thickness of about 55 nm. Below: Symmetric 2theta-omega scan using a PIXcel3D detector. Only peaks of (00L) planes of the ZnO layer are observable. 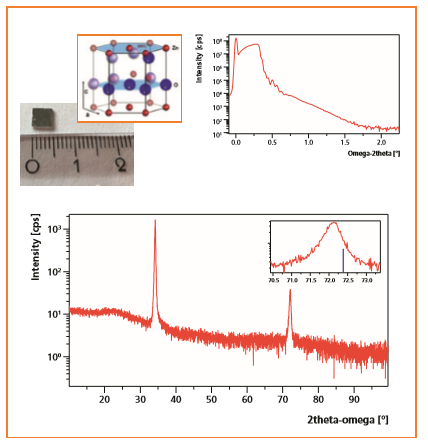 Figure 1 (page 1) shows one of the reflectivity scans. Using the Fourier method in the Reflectivity software, a thickness of 55 nm was obtained for the ZnO layer. In the symmetric 2theta-omega scan in Figure 1, the sole existence of (00L) peaks of the ZnO layer demonstrates that the c axis of the ZnO crystal is parallel to the sample normal. This conclusion is verified from the pole figure results shown in Figure 2 (left). The orientation distribution function (ODF) plot shown in Figure 2 (right) confirms that the ZnO layer has random in-plane lattice orientation and this is typical for fiber texture samples. 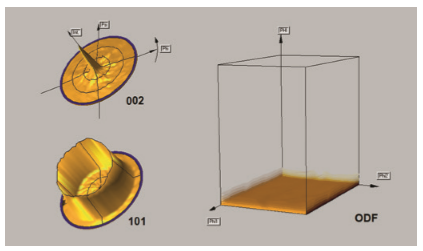 By careful investigation of the symmetric scan shown in Figure 1, it was observed that the position of the (004) peak was shifted to lower 2θ-angles compared to the respective ICDD powder reference peak position (00-036-1451). This peak shift indicates that the ZnO layer could be subject to compressive stress. In order to investigate and quantify the stress level, stress measurements were initially performed and analyzed using a modified sin2ψ method at grazing incidence geometry [1]. However, due to the fiber texture of the sample, the grazing incidence XRD approach (which is only sensitive to the random component of crystallites) revealed only a few diffraction peaks at very weak intensity over the full sin2ψ range. This resulted in a significant uncertainty in the stress analysis. Alternatively, using a combined multiple- chi tilt and multiple hkl approach, our dedicated hardware and software solution was used to perform accurate stress analysis of highly textured thin films. The resulting analysis (Figure 3) reveals a compressive stress of -412.8 MPa in the ZnO layer. The error of less than 3% indicates a very reliable analysis. 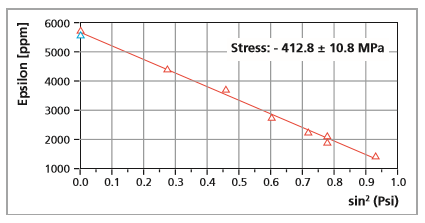 We demonstrate how Malvern Panalytical’s multipurpose diffractometers can provide a tailored solution and  a streamlined way of working for the investigation of layer quality and orientation for technologically relevant ZnO layers. The diffractometers can be used both for investigative research and also for routine measurements employing automated batch programs. These instruments offer true versatility of both measurement and workflow.