In this study we demonstrate the usage of a temperature-controlled capillary holder within a SAXS setup for studying the phase behavior of a surfactant / water system as a function of temperature and concentration. The formation of lyotropic liquid crystalline (LC) phases is analyzed and results are compared with published data to validate the performance of the temperature-controlled capillary holder within the SAXS setup.

A temperature-controlled capillary holder was used for a SAXS study on the formation of lyotropic liquid crystalline phases in a surfactant/water system at two different concentrations. Upon variation of the temperature, reversible transitions between an isotropic and a lamellar or hexagonal phase were observed, respectively. Lattice parameters could be determined. The transition temperatures are in good agreement with those reported in the literature.

Soft matter tends to self-organize into nanostructures and superstructures, e.g. by a self-assembly process of molecular units. These hierarchical structures formed on different length scales often result in technologically interesting properties that are utilized in functional materials or effect additives. Typical soft matter samples include polymers, emulsions, colloids, surfactants, lipids and biomacromolecules. Due to the generally weak interactions between structural elements, soft matter is highly sensitive to external stimuli, such as temperature, pressure and shear forces, or to changes e.g. in pH, concentration or ionic strength. These may result in a re-organization of the hierarchical structures. SAXS/WAXS is a premier tool for the in situ analysis of nanostructures in soft matter. In this study we demonstrate the usage of a temperature- controlled capillary holder within a SAXS setup for studying the phase behavior of a surfactant / water system as a function of temperature and concentration. The formation of lyotropic liquid crystalline (LC) phases is analyzed and results are compared with published data to validate the performance of the temperature-controlled capillary holder within the SAXS setup.

The holder was used with disposable quartz capillaries (Hilgenberg GmbH, Germany) having an outer diameter of 1.0 mm. The temperature of a sample that is loaded in the capillary can be controlled within a range of 5 and 70 °C. Heating/cooling liquid from an external cryo-compact circulator (model CF31, Julabo GmbH, Germany) that is connected to the capillary holder is guided in channels around the sample. In close proximity to the sample an external sensor measures the actual temperature. The open end of the capillary is covered with a plastic cap to prevent evaporation of the sample. The holder is compatible both with ScatterX78 and the SAXS/WAXS stage. 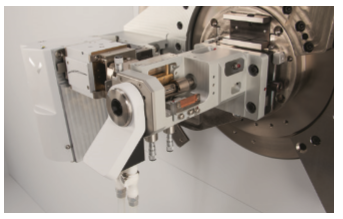 SAXS measurements were done on the Empyrean instrument with a setup using the line focus of a Cu X-ray tube, a focusing X-ray mirror, ScatterX78 with the temperature-controlled capillary holder, and the PIXcel3D detector. In the Data Collector software a batch program was created to automatically measure a whole series of SAXS data at different temperatures, without the need for user intervention. The temperature profile was programmed in the EasyTemp software (Julabo GmbH, Germany). A heating / cooling cycle between 5 and 70 °C was chosen, with approximately ten minutes of equilibration time at each set temperature. Here the SAXS data acquisition time at each set temperature was 60 min. Good data can already be obtained within a few minutes, however. 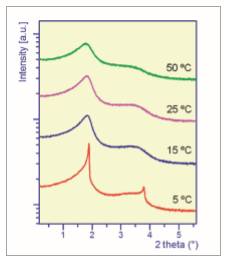 The SAXS data measured from the two surfactant / water mixtures are shown in Figures 2 and 3 at a few representative temperatures. For the sake of clarity, the data were vertically offset. In case of the 70 wt% / 30 wt% binary mixture the SAXS patterns measured at the higher temperatures can be associated with the presence of an isotropic phase in which individual surfactant micelles are present at high concentration. Upon cooling the sample, the occurrence of a lamellar lyotropic phase can be observed at around 5 °C. This is evidenced by the pronounced low-angle diffraction peaks appearing at relative scattering vector q positions of 1 : 2 : 3... From the positions of the peaks the lamellar spacing can be determined to approx. 4.6 nm. In case of the 50 wt% / 50 wt% binary mixture scattering patterns pointing to an isotropic, concentrated micellar phase were again observed at the higher temperatures. Upon cooling the sample, distinct diffraction peaks with relative q positions of 1: 3½ : 2... first appeared at a transition temperature of 32 °C. From this it can be concluded that a LC phase with a hexagonal structure was formed.

Between 30 °C and 5 °C a small, but measurable shift of the diffraction peaks towards larger angles could be observed. This indicates a small decrease of the lattice parameter d with decreasing temperature. At 30 °C the distance between adjacent rows of cylinders in the hexagonal LC phase could be determined to approx. 5.9 nm. When cycling the temperature between the upper and lower limit, the respective isotropic-to-LC phase transitions were found to be reversible. Furthermore, the observed transition temperatures and the identified LC phases are in agreement with those reported in the literature (K. Beyer, K. J. Colloid Interface Sci. (1982), 86, 73). 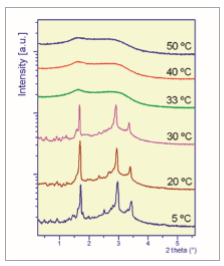 Lyotropic liquid crystalline phases could be readily studied in a surfactant/water system as a function of temperature and sample composition. The transition temperatures determined by SAXS are in agreement with published data and confirm the correct functioning of the temperature-controlled capillary holder. Furthermore, lattice parameters could be determined from the measured low-angle diffraction peaks.