According to the chemistry web dictionary at www.chemicool.com, the definition of electroosmosis is “the process by which charged particles will tend to migrate toward a less charged area.” Electroosmosis is typically discussed with regard to its influence on the flow characteristics of charged analytes in capillary electrophoresis measurements, and it arises as a direct consequence of the charge on the capillary surface.

Figure 1 shows a schematic describing the distribution on ions near a charged surface. Near the surface, there is a high density of counter-ions with a charge opposite that of the surface. As one moves away from the surface, the ion distribution moves toward a charge balance, the electrostatic potential observed at defined point in the solution decays exponentially according to the Poisson-Boltzmann equation. The region of counter-ion imbalance is defined as the double layer. 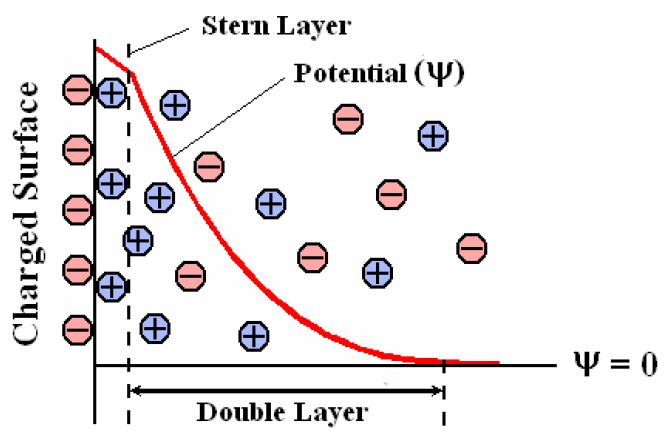 Figure 1: Schematic describing the distribution of counter-ions near a charged surface.

When an electric field is applied across the length of a capillary, the counter-ions near the charged surface will migrate toward the poles of opposite charge. Because the ions are solvated, water is dragged along with the counter ion as it moves toward the pole of opposite charge. As the counter-ions near the capillary surface at the “same sign” pole are depleted, they are replenished by counter-ions from the center of the cell. This circular movement of counter-ions induces a circular fluid flow in the capillary (see Figure 2), and it is this fluid flow that is of interest in capillary cell electrophoretic measurements, such as electrophoretic light scattering.

Figure 2: Schematic describing the effects of electroosmosis on the solvent flow within a surface charged capillary.

Figure 3 shows a 3-D representation of the solvent flow within a surface charged capillary, upon application of an electric field. As seen in this figure, there is a point, a short distance away from the capillary surface, where the fluid flow is balanced. This point is defined as the “stationary layer”, and it is at this point that the effects of electroosmosis are negated or balanced. Because of the absence of a net electroosmotic flow, the stationary layer is also the point where classical electrophoretic light scattering measurements are collected. The caveat to this approach is that the location of the stationary layer is dependent upon both the magnitude of the capillary surface charge and the concentration of supporting electrolytes.

Figure 3: 3-D representation of electroosmotic flow in a charged capillary upon application of an electric field.

Figure 4: 3-D representation of electroosmotic flow in a charged capillary upon application of an electric field during the FFR phase of an electrophoretic mobility measurement with the Zetasizer Nano system.