Triple or Tetra detection GPC is a well-established technique for accurate characterization of macromolecules. Adding advanced detectors such as light scattering, in conjunction with a concentration detector, overcomes the limitations of conventional GPC column calibration and provides absolute molecular weight determination. In addition, a viscometer measuring intrinsic viscosity can be added to reveal structural differences or calculate the degree of branching. Simply put, advanced detection with multiple types of detectors, allows more, and more accurate, information to be obtained from a single injection.

After deciding conventional column calibration isn’t sufficient for your GPC analysis, you might be asking yourself a few questions.

A modular detector setup (Figure 1A) offers the benefits of added flexibility to move around detectors to multiple systems. However, the benefits of moving detectors around come at a cost of added dead volume between detectors which is not temperature controlled. The integrated detector setup (Figure 1B) minimizes inter-detector tubing by placing all detectors in close proximity in a temperature controlled module. Minimizing inter-detector volume reduces band-broadening and dispersion as the sample passes from the first detector to the last detector. Band-broadening leads to poorer resolution and decreased sensitivity of the latter detectors. In a multi-detector GPC system with three or more detectors, maintaining the resolution of chromatography throughout the entire system is key to achieving high quality data with the highest signal-to-noise. 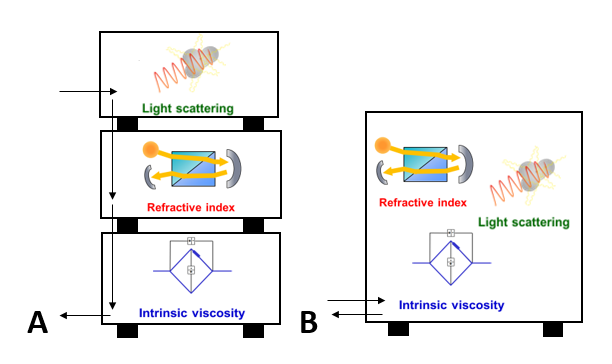 Most multi-detector GPC systems arrange all detectors in series to maximize sample concentration and avoid splitting flow with parallel detectors. While modular detectors can easily be attached to existing conventional systems with UV or refractive index detectors, this usually doesn’t allow all detectors to remain in series. Any flow splits between detectors inherently decreases the sensitivity as the sample concentration decreases. If flow must be split between two detectors such as the refractive index and viscometer, great care must be taken to ensure flow splitting is equal across detectors. Changes in inner diameter of tubing between detectors should be avoided as this will favor flow in one direction and result in a much lower signal for the latter detector.

To evaluate the differences between a modular and integrated design, a 1 mg/mL concentration of 105 kDa polystyrene standard with polydispersity of 1.03 was prepared and injected into a tetra detection GPC system. The injection volume was fixed at 100 uL. Different multi-detector configurations were compared to evaluate band-broadening and signal response.

In this comparison, the order of detectors was fixed with all respective detectors in series: UV, light scattering, refractive index, and viscometer. Figure 2 compares the response of the light scattering and viscometer signals for the integrated design versus a modular design. The shift in retention time comes from the different lengths of tubing between the detectors. The peak shape is slightly wider for the modular design as well as a slight decrease in the peak height. These differences are a direct result from increased inter-detector dead volume in the modular design. In this comparison, the integrated system has a total inter-detector volume of just 340 uL while the modular system has roughly 680 uL. 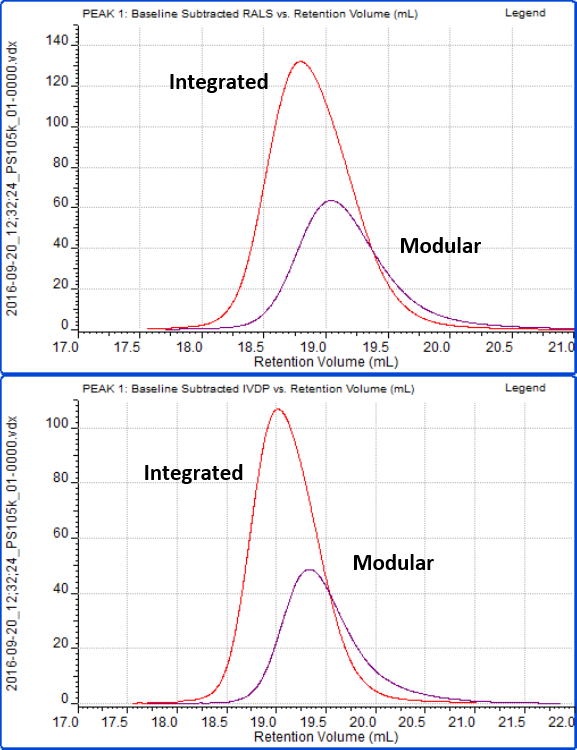 Figure 2: Comparison of a modular (purple) and integrated (red) multi-detector GPC system. The light scattering (top) and viscometer (bottom) signals are shown to visualize the effects of sample dilution by adding more inter-detector tubing in the modular design.

One common configuration for adding advanced detection to an existing conventional GPC system (Figure 3) is by splitting flow after the columns (or first detector) and running separately into subsequent detectors.  This allows the RI detector and the viscometer to be last in their respective detector sequences. In both cases, this protects them from the additional back pressure coming from later detectors, which can damage the RI flow cell or the viscometer pressure transducers. 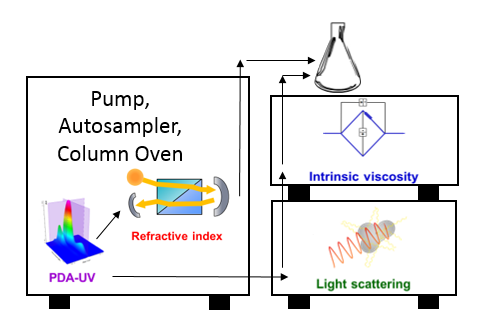 The light scattering and viscometer performance for an integrated multi-detector design versus the split flow modular design was compared in Figure 4. There was a significant reduction in response in the light scattering detector with peak shape distortion from band broadening. While the software can add band broadening corrections, it cannot help the diminished light scattering sensitivity. This particular sample has a molecular weight around 100 kDa, fairly high dn/dc of 0.185, and very narrow distribution. Much higher sample concentrations would be necessary to achieve quality data with samples of lower molecular weight, lower dn/dc, and broader distributions. Additionally, the viscometer signal for the modular design exhibited a ten-fold decrease in signal and shows significant band-broadening from dilution.  The sensitivity of a viscometer is strongly dependent on flow rate, and so the reduction in flow rate that accompanies the flow split compounds the loss of sensitivity.  In this comparison, the integrated system has a total inter-detector dead volume of just 340 uL while the modular system has roughly 860 uL of dead volume. 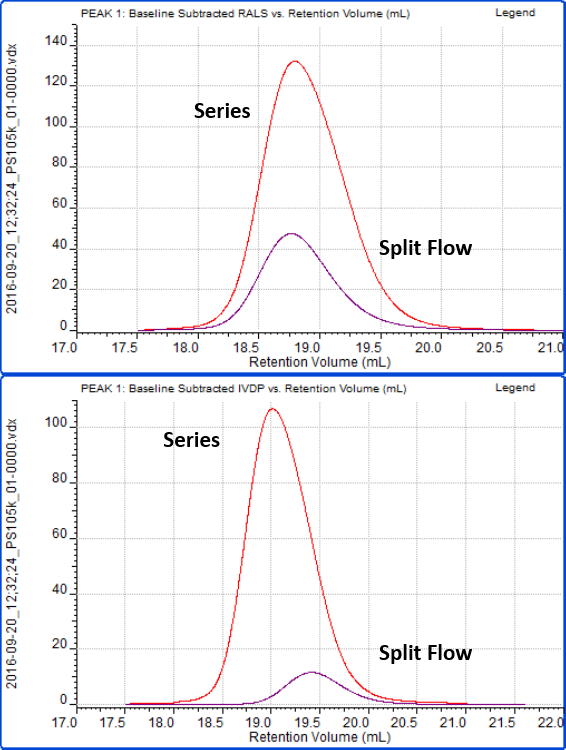 In some cases, the flow split between the refractive index and advanced detectors can become unbalanced and favor one direction over another. This would be the case if the existing conventional GPC system has a different inner diameter tubing than the tubing of the light scattering detector or viscometer. Figure 5 compares the integrated multi-detector GPC to the split flow modular setup where different diameters of tubing were used between the refractive index and advanced detectors. In this comparison, the integrated system has a total inter-detector dead volume of just 340 uL while the modular system has roughly 2.3 mL of dead volume. The light scattering peak is quite distorted from band-broadening and the viscometer is not useable. This configuration would not be recommended for triple or tetra detection. 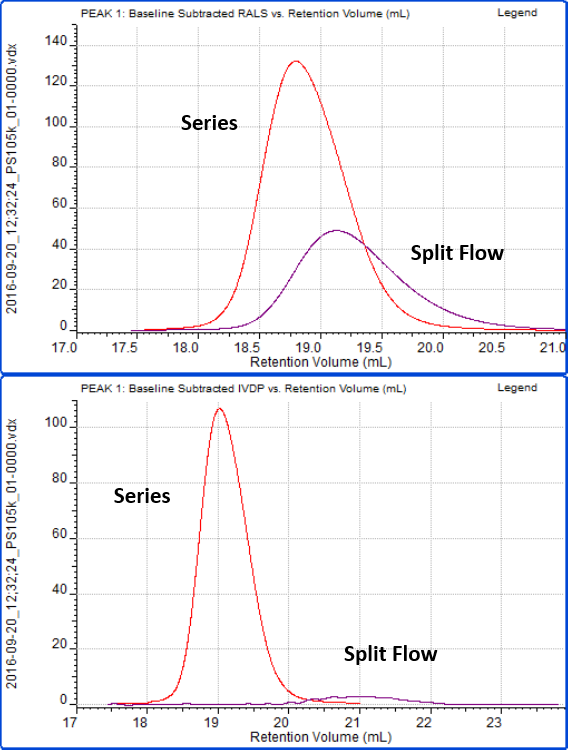 When choosing the best multi-detector GPC system, one must consider the trade-offs when adding modular detectors to existing conventional GPC systems. While a modular detector does offer some apparent flexibility, an integrated multi-detector GPC system maintains the resolution of the columns while providing the highest sensitivity of detection across all detectors, generating the most information, and at the highest quality. When considering upgrading from a conventional system, the different alternatives should be considered to make sure the key requirement is being met. This is especially true with regards to a viscometer detector as its sensitivity is strongly dependent on the detectors being kept in series.