Contactar a ventas
All Nanoparticle Tracking Analysis (NTA) measurements are controlled via Standard Operating Procedures (SOPs) from software scripts. A number of commonly used scripts are supplied with the instrument and here we outline all the available script commands for NTA3.1 software allowing users to generate further scripts to meet there specific needs.

The script control feature in NTA 3.1 allows the user to program a list of hardware or software commands for the software to follow. This can be useful in creating Standard Operating Procedures, or for time-based studies, as the commands can be entered and the instrument left to run automatically. Scripts can be run at the time of writing or created and saved for later use.

The Script Panel can be found on the left hand side of the screen, on opening the NTA 3.1 software. Place the mouse icon over the ‘Script Panel’ text and drag the panel out into the main NTA window area. The panel will expand as shown in Figure 1: 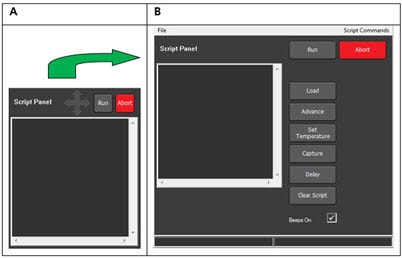 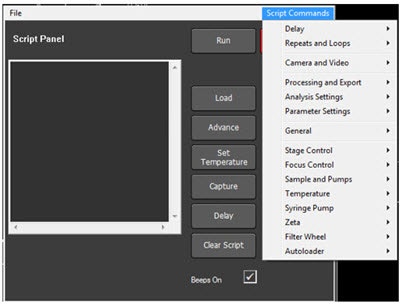 A script run can be started or aborted with the ‘Run’ and ‘Abort’ buttons, respectively. To save a script or load a previously-saved script back into the command window, click on the File menu at the top left of the Script Panel. The Script Panel can be re-docked back into the main NTA software screen by double clicking on any blank area of the panel. 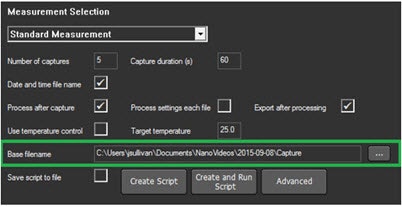 The usage and syntax for all NTA 3.1 commands are listed below. The full list provided here will not be available on all NanoSight instruments; the commands that can be used will depend on the specific system configuration. Any additional parameters required should be entered with a space following the command. Required parameters are indicated by yellow highlighted text, with example values shown.

Scripted process to hold the loaded sample temperature at 37oC, and run an NTA measurement of 60 seconds capture duration every 5 minutes for half an hour, starting immediately after the sample temperature is initially set. All videos should be captured at camera level 10 and analyzed at detection threshold 5.