Multi-angle dynamic light scattering (MADLS®) available on the Zetasizer Ultra delivers an angular-independent particle size distribution (PSD) with increased resolution by combining scattering information from multiple angles. The measurement provides improved insight into all particle size populations present in the sample, as populations that may be weakly scattering at one detection angle, are revealed in the other detection angles, and brought into the combined-angle PSD. In this technical note we explain the basic principles behind the MADLS measurement and demonstrate the benefits for a mixture of polystyrene spheres of different sizes.

Multi-angle dynamic light scattering (MADLS®) delivers an angular-independent particle size distribution (PSD) with increased resolution by combining scattering information from multiple angles. The measurement provides improved insight into all particle size populations present in the sample, as populations that may be weakly scattering at one detection angle, are revealed in the other detection angles, and brought into the combined-angle PSD.

The analysis of a single-angle DLS measurement is carried out using a least squares minimization algorithm to determine the size distribution solution that best fits the measured autocorrelation function. Typically, the specific algorithm chosen is influenced by constraints that may be placed on the solution, such as smoothness or non-negativity. The predicted instrument response (hereon termed scattering matrix) provides the necessary algebraic transformation from result to measurement:

Where g1(τ) is the autocorrelation coefficient measured at each lag time (τ). The particle size distribution is x(d) and is intrinsically weighted by the intensity of the light scattered by each particle size component, d. Each element in the scattering matrix, K(τ,d), a function of lag time and particle size is calculated according to the following:

Where g1(τ) is the field autocorrelation function, q is the scattering vector and Dt is the translational diffusion coefficient which relates to the particle size (hydrodynamic radius or diameter) via the Stokes-Einstein equation.

The MADLS approach [1, 2] is an extension of the single-angle method but with the addition of multiple measurement angles to the transform. The autocorrelation functions are concatenated as well as the scattering matrices to produce the following system of linear equations, c.f. similarity to eq.1:

When combining data from multiple angles, it is important to preserve the weighting inherent in the PSD. Therefore, the scattering matrix for each measurement angle is weighted by the expected scattered intensity. In the Zetasizer Ultra, the PSD can be viewed as a backscatter-equivalent intensity-weighted PSD or as a volume-weighted distribution, which is independent of scattering angle. The scattered intensity (specifically differential scattering cross-section) is calculated using Mie theory and requires knowledge of the material and dispersant optical properties (refractive index and absorption). Without the correct optical properties, the MADLS algorithm will fail to converge on the true solution.

In deriving the solution, the least squares minimisation algorithm aims to reduce the magnitude of the residual (the difference between the measured autocorrelation function and the prediction). Each angular contribution to the residual is weighted separately to account for the result uncertainty expected in that angle.

The MADLS analysis sequence described here is represented schematically in Figure 1. It is important to recognise that the solution PSD is the result of fitting to multi-angle auto-correlation data simultaneously to derive a single solution that satisfies the measurement at all three angles.

To demonstrate the MADLS measurement, a mixture of polystyrene spheres with diameter 150 nm and 300 nm and similar scattering intensities were prepared in a 10 mM aqueous solution of NaCl. The single-angle results (backscatter, side scatter and forward scatter) are presented in Figure 2, showing that measurement at just one angle can resolve one only size population and that the size differs dependent on the measurement angle. Therefore, a single result at each angle is difficult to interpret – each is different. This behavior can be inferred from measurement using backscatter alone. As the size is greater than ~60 nm, particles will be non-isotropically scattering and they will scatter at different intensities dependent on the angle of observation and the particle size. Therefore, a small degree of sample polydispersity is likely to complicate interpretation of the results for the user as information from additional angles can seem contradictory. 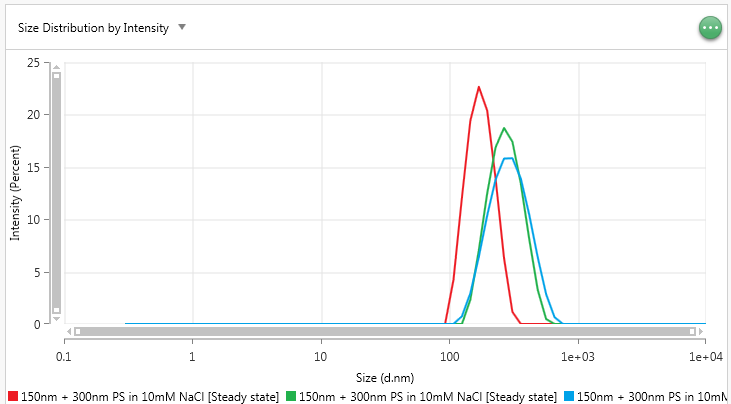 The multi-angle MADLS result is presented in Figure 3 and shows a distinct peak corresponding to each component of the mixture. The peaks are separated by a 2:1 ratio by size.  The user can now see a more complete and realistic particle size distribution, free of angular dependence that is more readily interpretable than three separate size results. 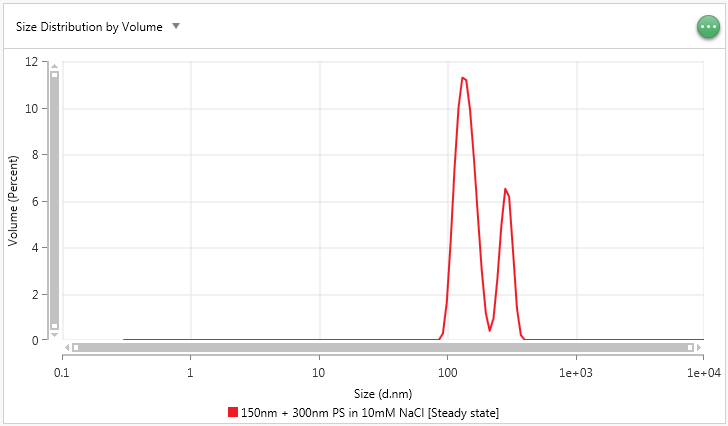 A benefit of MADLS is that it is a higher resolution technique than single-angle DLS and can be used to further characterise a sample after initial screening by DLS. In some cases, the use of MADLS can reduce the need of using other techniques, such as TEM, that may have otherwise been employed to complete characterisation at every development stage up to final stage verification.

The highest resolution arises when both of these conditions are met. It is possible to resolve both components in a mixture of 150 nm and 300 nm diameter spheres because there is sufficient anisotropy in the scattering by diameters 300 nm and above, i.e. with the resolution is 2:1. It is usually not possible to resolve 100 nm and 200 nm mixtures of polystyrene since both populations scatter with little angular dependence and the resolution is not maximized.

The MADLS technique has been explained for users interested in how the measurement data is analysed. The origins of the improved resolution over a single-angle measurement have been discussed. This powerful technique allows users of the Zetasizer Ultra to gather additional insight into their sample by providing an angular independent result – multiple angles are measured to generate a single, more complete, size distribution allowing users to easily interpret their size data with no need to guess component size populations from multiple results from multiple angles.  MADLS’s increased resolution helps to bridge the gap between traditional dynamic light scattering and high-resolution techniques such as SEC or TEM, reducing the requirements to run samples on such time-consuming techniques.