Aggregation of both biological and synthetic materials is a serious cause for concern, posing problems at various stages of the discovery and formulation processes. Liposomes have been used in drug discovery and drug delivery for some time, and the biophysical characterization of these systems and their payloads is critical to understanding their function. One such payload, which we focus on here, is the membrane-associated receptor tyrosine kinase (RTK) targets which continue to be the focus of many discovery campaigns. Our aim is to correlate previously published activity data with the changes in size and aggregation state of the liposome-RTK complex as measured by Nanoparticle Tracking Analysis (NTA).

Aggregation of both biological and synthetic materials is a serious cause for concern, posing problems at various stages of the discovery and formulation processes.  The ability to identify and characterize aggregates is of broad utility, and the experiments described here demonstrate the unique ability of Nanoparticle Tacking Analysis (NTA) technique to understand dynamics of aggregation in a biological system through high resolution particle-by-particle analysis.

For this work, we used a model system that has been utilized in drug discovery and presents some unique challenges in reagent characterization. This system was generated to allow functional assembly of cloned/recombinant membrane receptors on liposomes, without the necessity of reconstitution of full length receptors. The aim of this study was to correlate previously published activity data1,2 with the changes in size and aggregation state of the liposome-RTK complex as measured by Nanoparticle Tracking Analysis (NTA).  It is expected that the experiments described here represent characterization methods which will be of broad utility to the nanoparticle field. Determination of size, assessment of polydispersity, and identification of components which promote aggregation are all of interest and can all be assessed in these simple experiments.

Liposomes have been used in drug discovery and drug delivery for some time, and the biophysical characterization of these systems and their payloads is critical to understanding their function. One such payload, which we have focused on here, is the membrane-associated receptor tyrosine kinase (RTK) targets which continue to be the focus of many discovery campaigns. RTKs are typically single-pass transmembrane signaling proteins which are difficult to purify intact, and are important targets in many disease pathways. This model characterization system was chosen for this work because of the abundance of activity data that exists.

For this work, we first investigated the aggregation state of a representative RTK target (kinase domain of insulin receptor).  Next we analyzed the RTK on an engineered cell-like scaffold, specifically a liposome functionalized with nickel-chelated head groups (described in references 1 and 2).  Briefly, the nickel head groups facilitate template-directed self-assembly of his-tagged RTKs, such that the kinase domains (cytoplasmic fragments) are oriented as though within the cell (Figure 1). This analysis was performed using magnesium (Mg) or manganese (Mn) as the available counter-ion in the assay buffer, in order to understand why manganese might be increasing the activity level of kinases despite the understanding that manganese is not a physiologically relevant counter-ion. We hoped to gain insight into the effects of counter-ion using NTA, and to correlate this to previously obtained activity data.

The NanoSight range from Malvern Instruments presents a unique capability to rapidly characterize this well-studied drug discovery system by directly visualizing nanoscale particles in suspension (between 10 to 2000 nm), with high-resolution, in real-time and with minimal sample preparation. The NTA technique delivers an unprecedented insight into size distributions through a particle-by-particle approach to particle sizing.  NanoSight provides visual validation and high resolution analysis of particles within the nanoscale range with both size and concentration measurements.  NTA offers a robust analysis of this liposome-protein system and sheds light on this method of kinase activation.

Extruded liposomes and purified protein were obtained from Blue Sky BioServices. Samples were diluted in HEPES buffer prior to analysis by a NanoSight NS300 equipped with a high sensitivity Hamamatsu sCMOS camera, 20x objective lens, and a 50 mW green 532 nm laser.  Samples were analyzed using NTA 3.1 Build 46 software.  NanoSight technology observes the Brownian motion of particles in suspension and calculates their hydrodynamic size through the Stokes-Einstein equation.  It derives concentration by observing particles on a frame-by-frame basis through the use of the sCMOS camera (25 frames per second).  The software determines the number of particles per frame in a field of view and calculates a number-weighted concentration result. 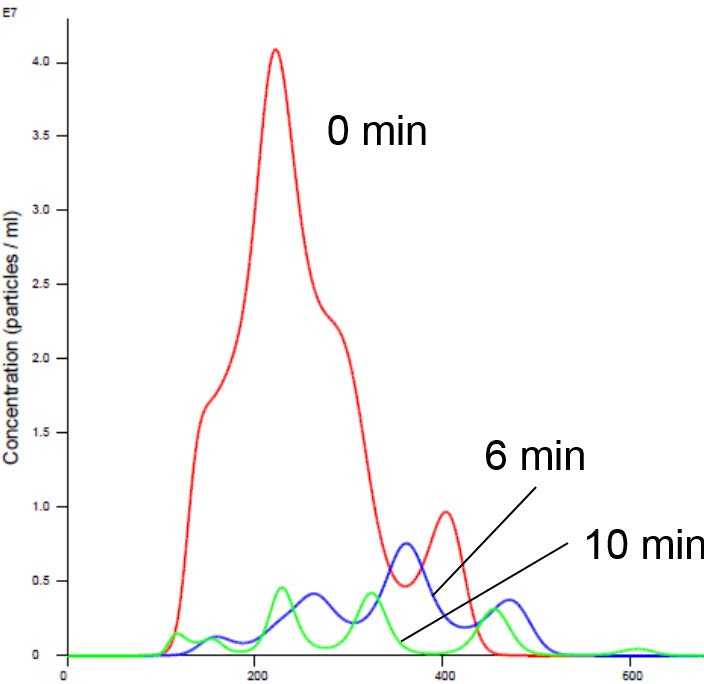 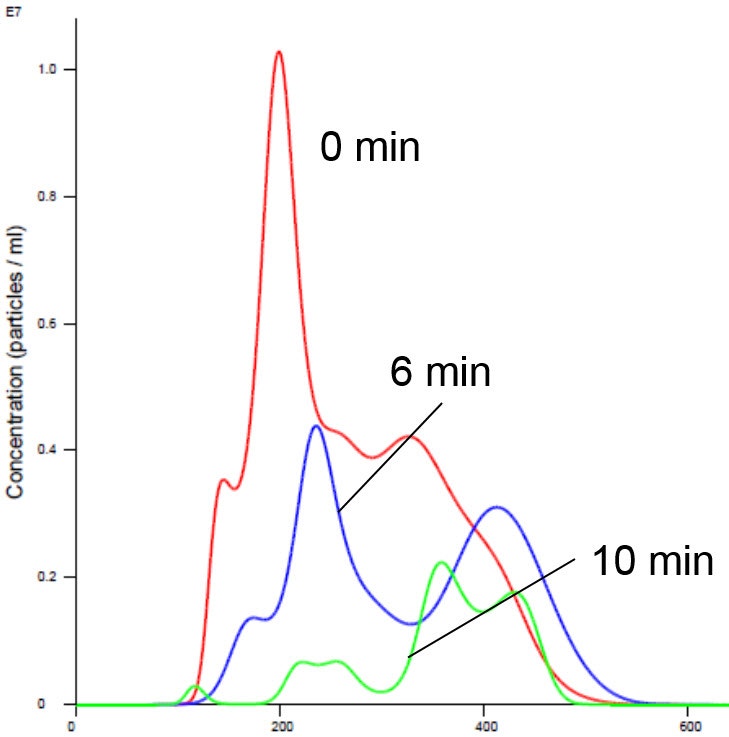 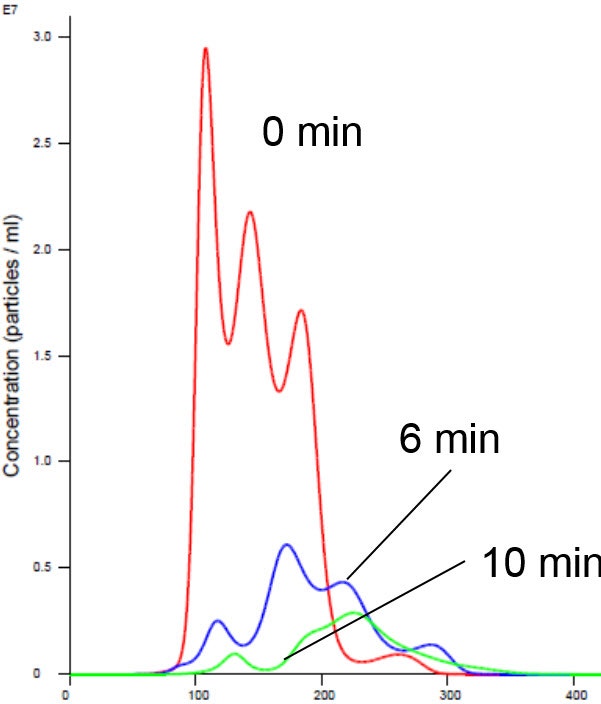 Addition of magnesium to RTK did not cause aggregation and was consistent with previously generated data which showed no appreciable activity on addition of Mg1,2,5 (Figure 5 and 6). 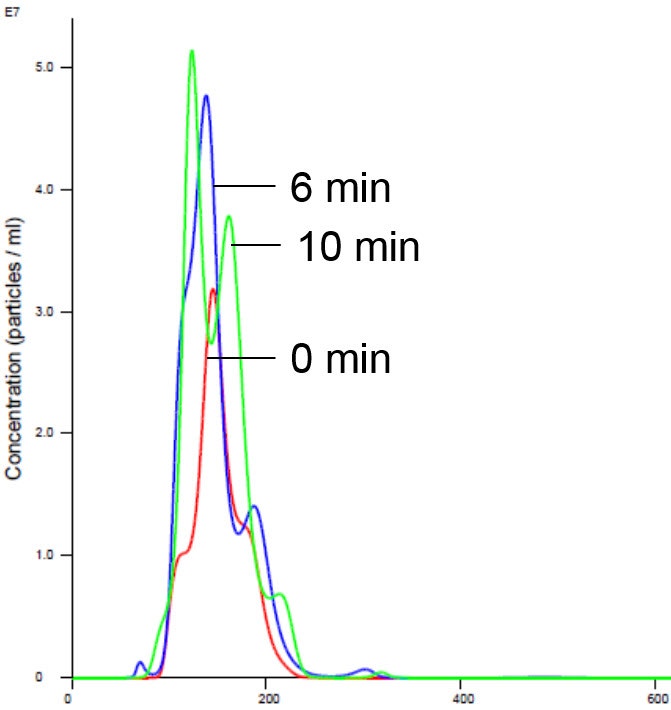 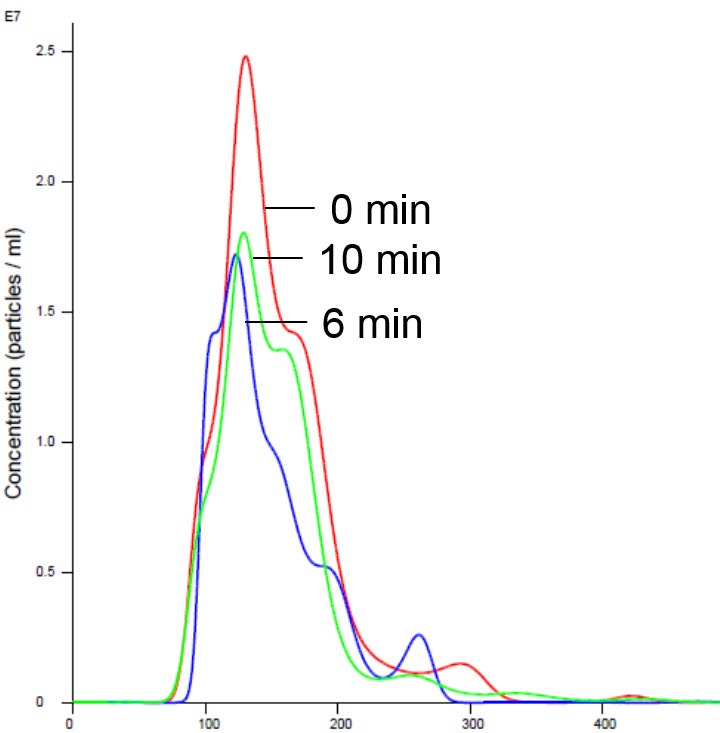 The idea that magnesium is a biologically relevant counter-ion but its addition does not lead to activity has been puzzling.  Adding Mg to RTK and liposome did not promote aggregation but led to high cell like activity1,2,5.  The RTK potentially assembles on the outside of the liposome in the same manner as it does inside the cell (Figure 1).  Mn causes aggregation and fortuitously increases activity in a cost-effective and simple manner with reasonable reproducibility and robustness.  When RTK is properly self-assembled on a liposome in the presence of magnesium, a biologically relevant counterion, the following benefits are reported1,2,5:

It is expected that template-assembled enzymes are a better screening tool because the target appears to be in cell-like conformation, and allows unique opportunity for screening protein-protein interactions.  This work points to the need for better understanding of the difference between forced colocalization (or molecular crowding) vs. functional assembly of RTK complexes (for interesting colocalization discussion, see reference 4).  The work presented here is consistent with the theory that manganese is increasing the catalytic activity of some kinases by facilitating formation of aggregated complexes.

NTA is a useful technique for accurately characterizing the aggregation behavior of liposome preparations under a range of conditions. The high resolution data provides a unique insight into the aggregation kinetics of these systems. The results here call into question the relevance of compounds selected in high-throughput screening (HTS) assays using Mn as a counter-ion.

TDA technology used to prepare the liposomes is protected by patent and available via Blue Sky Bioservices for license:  US: 8,541,190