This application note describes the texture analysis of a rolled copper specimen. The experimental data were measured on a multi-purpose X-ray diffraction system equipped with a texture cradle.

This application note describes the texture analysis of a rolled copper specimen. The experimental data were measured on a multi-purpose X-ray diffraction system equipped with a texture cradle. These experiments can be performed on X’Pert PRO MRD or Empyrean systems, equipped with a multiple-axes cradle. For the analysis of the data, the Malvern Panalytical analytical software X’Pert Texture was used. Additional information from the pole figures is used to correct peak intensities for texture in standard phase analysis.

Texture measurements were performed on a rolled copper disc with a diameter of 22 mm and a thickness of 0.8 mm. The sample was mounted on an X-ray diffraction system equipped with a multiple-axes cradle. Four pole figures - (111), (200), (220) and (311) - were measured according to the Schulz reflection method.

A schematic representation of the experimental setup is shown. Background intensities were measured next to the diffraction peaks with an offset in 2θ of ±4°. To correct for defocusing effects due to sample tilt, two methods can be applied. One method uses experimental correction curves, measured on a texture-free copper ‘powder’ sample under the same experimental conditions as the rolled copper sample. Alternatively, the defocusing curve can be calculated (Gale and Griffiths, 1960, Huijser-Gerits and Rieck, 1974). For these calculations, knowledge of the full width at half maximum (FWHM) of the reflections at a zero χ-tilt is required. This information can be obtained from a θ-2θ scan, measured on the textured sample. X’Pert Texture, a software program for quantitative X-ray texture analysis, is used for the analysis and visualization of the texture data.

Firstly, the experimental pole figures are corrected for background intensities as measured on the textured samples. Secondly, the defocusing correction is applied either with the use of an experimental or a calculated defocusing curve. A comparison of these two curves for the Cu (220) pole figure is shown. The data are normalized with respect to the intensity at χ=0°. A good agreement between the measured and the calculated defocusing curves is revealed. This shows that the measurement geometry, on which Gale and Griffiths’ model is based, gives a good description of the experimental conditions in Malvern Panalytical’s diffractometers.

Figure 1 shows a 3D representation of the Cu (220) pole figure (a) as measured and (b) as corrected. The blue band in the pole figures indicates the non-measured areas above χ=75°. It is observed that the effect of the defocusing correction is most pronounced for the higher χ-tilt angles. 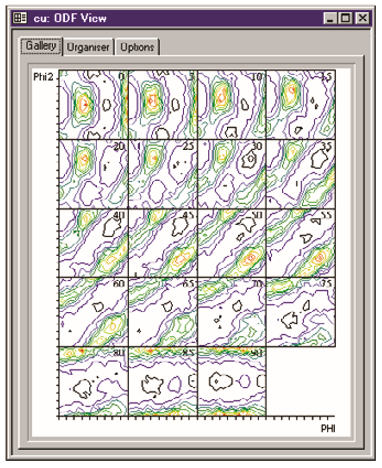 Figure 2. 2D representation of the ODF of the rolled copper specimen. The ODF is shown in the Bunge notation with Phi1 as fixed axis; the Phi1 step size is 5 degrees.

An additional feature of Texture is the evaluation of texture data with the use of K-factors and normalization factors. The K-factor is defined as the ratio of the intensity in a (raw, corrected or calculated) pole figure at χ = 0° to the average intensity over the total pole figure (Kogan and Bethke, 1997). K-factors can be used to convert intensities, measured on a textured sample, to ‘random’ powder intensities, which would be measured on a texture-free sample. With K-factors, you can correct intensities for e.g. qualitative or quantitative phase analysis.

It is shown that the normalization factors are in good accordance with the corrected intensities derived from the K-factors. Moreover, both these results show also a good agreement with the relative intensities as given on the ICDD reference pattern for copper, PDF No 04-0836 (last column). It should be noticed that the most realistic normalization and K-factors result either from pole figures (re-) calculated up to 90° from an ODF or from corrected pole figures, measured up to χ = 70 or 75°. In the first case, it is sufficient to measure only a few pole figures and to calculate the ODF and the necessary pole figures subsequently. In the latter case, no ODF calculation is necessary but all pole figures need to be measured. 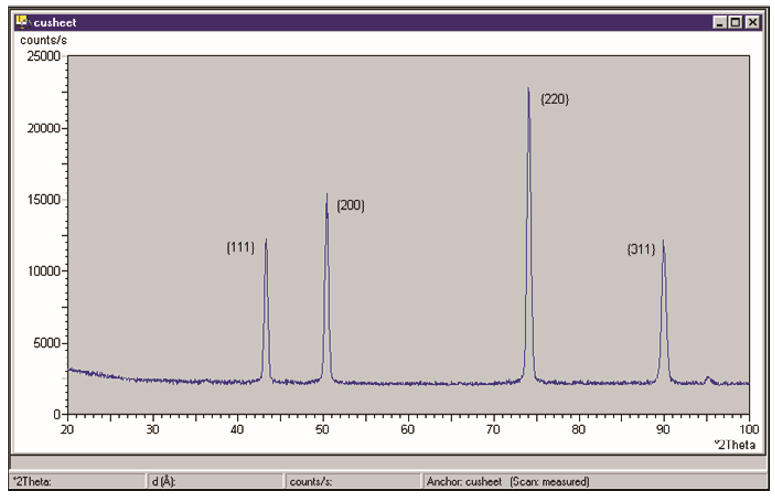 X-ray diffraction is used for the analysis of texture in a rolled copper specimen. The pole figures as recalculated from the ODF reveal a close resemblance with the corrected pole figures corrected for background intensities and defocusing effects. A good match between corrected and recalculated data confirms the consistent quality of the initial, experimental data. Additional information, as can directly be derived from pole figure data, is used to correct X-ray diffraction data for texture influences. The experimental data corrected with the use of K-factors and normalization factors are in good accordance with the ICDD data.