This data sheet reports the use of an advanced differential PDF (d-PDF) approach performed on the Empyrean multipurpose X-ray diffractometer, equipped with the GaliPIX3D detector and a Ag tube, for the analysis of a nano-sized PdO phase distributed on a reducible Fe2O3 support.

Catalytic oxidation of CO is relevant for the treatment and control of automotive exhaust gases, preventing fuel cell poisoning, regeneration of CO2 in sealed-off CO2 lasers, etc [1]. Nano-sized noble metals supported on reducible oxides such as iron and cobalt oxides have been found to enhance the catalytic activity in CO oxidation compared to nonreducible oxides [2,3]. Pair distribution function analysis (PDF) based on total scattering data [4] is one of the techniques of choice for the structural characterization of these nano-sized catalytic materials, the challenge being that these are often present in low concentrations and can be amorphous. An advanced application of PDF is the so-called differential PDF (or d-PDF), which is based on the subtraction of the PDF of a matrix from the PDF of the system “matrix + guest species”, in order to isolate the interatomic correlations of the guest species [5-8]. To enable this approach, the experimental data must be collected taking special care to reduce the statistical noise, because the signal to be analysed is just the difference of two very similar PDFs, and hence it is very weak. In this data sheet we demonstrate the application of this method to investigate the structure of nano-sized PdO phase distributed on the reducible Fe2O3 support. Unlike d-PDF studies previously reported, which were based on synchrotron data [5-8], we used a multipurpose laboratory diffractometer to collect high-energy X-ray diffraction data [9-12]. More details are reported in the publication [13].

Data collection for PDF and d-PDF

Total scattering measurements were carried out on the Empyrean, our multipurpose diffractometer, equipped with a Ag tube (λ = 0.5609 Å), a focusing mirror for Ag radiation and a GaliPIX3D detector [11]. The measurements were performed with a variable counting time strategy (VCT) [12] in the angular range 3°–148° 2θ, which reaches a QMAX value of 21.6 Å−1. The total measurement time was 4 hours for sample A, and 6 hours for samples B, C and for the empty capillary.

A TECNAI microscope was used for high-resolution transmission electron microscopy, after ultrasonic dispersion of the samples in ethanol and deposition onto holey carbon copper grids. 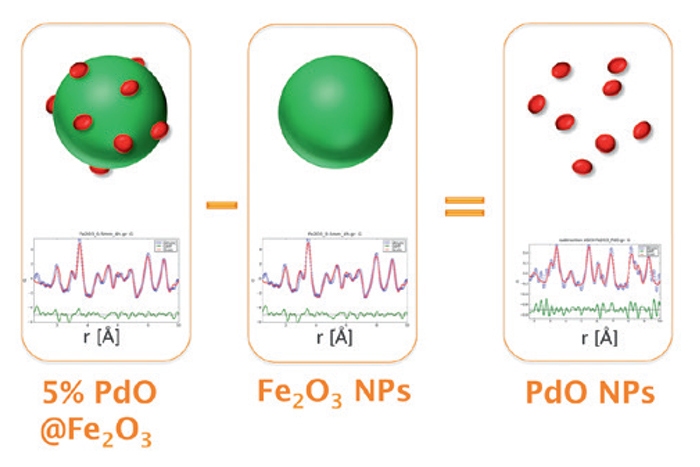 Figure 1. The differential PDF (d-PDF) analysis allowed to isolate the contribution of the PdO phase, which was then fitted with the tetragonal palladinite structure. Even if with higher noise, the d-PDF is consistent with the PDF of pure PdO and with the analysis using synchrotron data reported in the literature [7].

The initial analysis of the XRD patterns of samples A and B performed with the HighScore software suite [14] showed that the main phase is γ-Fe2O3 (see Figure 2a); a single weak peak indicating possible presence of PdO in the sample B was also found. However, conventional XRD was not sufficient to unambiguously identify the nano-sized PdO phase due to peak overlap and peak broadening. The PDF process was then initiated in HighScore, from the initial merging of the VCT data and background subtraction, to the subsequent PDFgeneration. The PDFs of samples A and B were fitted with the γ-Fe2O3 phase by using the PDFgui software [15]. Weak mismatches in the fit of sample B could be observed at distances corresponding to Pd-Pd and Pd-O bond lengths (Figure 2b); a bi-phase fit was also carried out using both the γ-Fe2O3 phase and the PdO phase, which improved the fit and confirmed the presence of PdO. In order to determine more precisely the contribution of the PdO phase, the differential PDF (d-PDF) approach was undertaken.

Two different methods were used to obtain the d-PDF: in one case the diffraction patterns of samples B and A were directly subtracted just after merging of the VCT scans, while in the second case the difference was calculated on the individual PDFs of samples B and A, respectively. Both methods produced the same final d-PDF of PdO, which is shown in Figure 2c, together with the fit performed with the tetragonal palladinite structure. Even with a higher level of fluctuations (due to noise in the differential data used as input for the Fourier transformation), the d-PDF is consistent with the PDF of the sample C (pure PdO – Figure 2c) and with the analysis using synchrotron data reported in the literature [8]. Moreover, from the decay of the d-PDF it was possible to estimate the structural coherence length of PdO particles (spherical model in PDFgui), which was found to be around 7 nm. This is the point where the d-PDF does not show any more structural information. This estimate is consistent with the HRTEM image (Figure 2d), which also shows the lattice plane 0.263 nm corresponding to the (101) plane of the tetragonal PdO phase.

Figure 2. (a) Reduced structure function of sample A. Inset: phase identification. (b) Comparison of the PDFs of samples A (blue) and B (red). (c) d- PDF (red) compared to PDF of PdO, sample C (blue). (D) HRTEM image showing a Pd-rich area.

An advanced differential PDF study was successfully performed on the Empyrean multipurpose diffractometer equipped with the GaliPIX3D detector to study nano-sized PdO catalyst supported on a support made by γ-Fe2O3. This type of differential approach is very demanding in terms of data quality because the signal to be analyzed is very weak. From the differential PDF it was possible to confirm the tetragonal structure of the PdO nanoparticles and to directly visualize the extent of the structural coherence of the PdO nanoparticles which was confirmed by HRTEM.