The manufacturing of devices based upon giant magneto- resistance (GMR) effect will require an unprecedented level of film thickness control. The spin valve, the most common GMR device, has seven ultra thin layers comprised of five distinct materials as depicted in Figure 1. 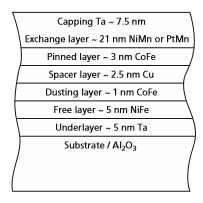 The thinnest layers in a spin valve film stack are a mere 5 to 10 Å thick. Moreover, some performance characteristics of a spin valve can display a nonlinear dependence upon layer thickness over the range of a few Ångströms. These factors highlight the importance of a film thickness metrology instrument capable of measuring multilayer thicknesses in a spin valve. Wavelength dispersive X-ray fluorescence spectrometry, utilized by the 2830 ZT Wafer Analyzer, represents such a technique.

A Malvern Panalytical 2830 ZT XRF Wafer Analyzer equipped with a fixed channel for Cu. Details of the measurement conditions are presented in Table 1.

Sensitivity and repeatability are two critical properties of any capable measuring technique. In this section, we present data demonstrating both of these properties for the 2830 ZT Wafer Analyzer.

Figure 2 represents a plot of measured copper thickness versus deposition time for a copper film. Note the linearity of the plot (R squared > 0.99) over 2 orders of magnitude variation in deposition time. This is a verification of the linearity of the measurement technique and of the stability of the deposition system. This means that calibration standards, thick enough to be measured by other techniques, such as profilometry and AFM, may be produced. The 2830 ZT Wafer Analyzer may be calibrated utilizing the thicker standards and a zero point (blank wafer). This calibration is valid for films too thin to measure accurately by traditional methods.

Figure 4 is a plot of measured copper thickness in the same spin valve stack taken at intervals over a two-week period. The standard deviation of the measured thickness was 0.04 angstrom, or less than 0.2% relative. The plots at the right demonstrate that X-ray fluorescence spectrometry is a powerful technique for monitoring the deposition of metal films in GMR fabrication process.

Figure 2. Thickness versus deposition time for a copper film

Figure 3. Measured thickness versus deposition time for the copper layer in the center of a spin valve stack

Figure 4. Copper thickness versus deposition time in the the same spin valve stack measured at intervals of a two-week period

It has been demonstrated that the X-ray fluorescence technique used by the 2830 ZT Wafer Analyzer has excellent sensitivity and repeatability for use as a GMR thickness metrology technique. The method is non-destructive and results are operator-independent.