In this application note, Field Application Scientist Dr Jonathan Mehtala describes how pharmaceutical scientists are using electrophoretic light scattering (ELS) to characterize lipid nanoparticles (LNPs) and why you should be using it. Reflecting on a recent publication that investigates the characterization of viral and non-viral vectors using multiple Malvern Panalytical technologies, Dr Mehtala shows how the Zetasizer Advance Ultra was used to measure the zeta potential of two mRNA-LNP* samples.

If you are a scientists or project leader working on the design, process and formulation development of lipid nanoparticles for drug or vaccine delivery - this application note will show you how the Zetasizer Advance can help you     is essential reading for you.

Following a recent publicationi investigating the characterization of viral and non-viral drug delivery vectors, this application note takes a close look at how researchers used the Zetasizer Advance Ultra to measure the zeta potential of two mRNA-LNP samples.

What are lipid nanoparticles

Lipid nanoparticles (LNPs) are the most common non-viral vector used in gene therapy and mRNA-based vaccines. Following decades of research and development their acceptance as a drug delivery vector has been accelerated by the approval of multiple mRNA-LNPs COVID-19 vaccines. LNPs are composed of at least four components:

Why measure the zeta potential of LNP formulations?

Zeta potential is a charge property that predicts nanoparticle stability and correlates to other properties. It is used in drug development to compare stability between buffer formulations, lipid composition, and for basic nanomaterials.

Charged particles exert an electrostatic inter-particle repulsive force that increases colloidal stability. In the absence of a strong stabilizing electrostatic force, it is common to add steric stabilizers in the form of non-ionic surfactants such as PEG to the liquid formulation or particle surface.  For pharmaceutical drug products, poor stability can result in undesired outcomes, such as short shelf-life, loss of efficacy, and increased safety risksii.

Two mRNA-LNP formulations were used, LNP1 and LNP2iii. Electrophoretic light scattering (ELS) measurements of the lipid nanoparticles samples were measured using a Zetasizer Ultra Red instrument equipped with a He-Ne laser at a wavelength of 633 nm and maximum power of 10 mW. Amounts of 700 µL of the samples were introduced into a folded capillary cell, DTS1070iv, using the Diffusion Barrier method (see below). The duration of 35 zeta potential measurements was manually set up, with 10 sub-runs per measurement.

pH titrations of the mRNA-LNP formulations, prepared in 10 mM NaCl (10 mL sample volume), were performed with the multipurpose titrator 3 (MPT3) accessory, degasser and Zetasizer Ultra Red at a temperature of 25°C.

The zeta potential for LNP formulation samples in PBS were mRNA-LNP1: -19.5 mV and mRNA-LNP2: -6.62 mVBoth measurements showed excellent repeatability with standard deviations of only 1.32 mV and 1.47 mV, respectively (Table 1).

Table 1: Zeta potential mean values (in mV) and Z-average diameters (in nm) for the mRNA-LNP1 and mRNA-LNP2 samples measured in PBS using the diffusion barrier method

The MPT-3 auto titrator was used to measure zeta potential over a pH range of 2.5 to 9.5.  At high and low pH in 10 mM NaCl, the zeta potential for mRNA-LNP1 and mRNA-LNP2 were virtually identical, at approximately +19 mV and -35 mV, respectively.  However, the isoelectric points (pI) of the two samples were different, with mRNA-LNP1 having a pI at pH 5.89 and mRNA-LNP2 at pH 5.21 (Figure 2). 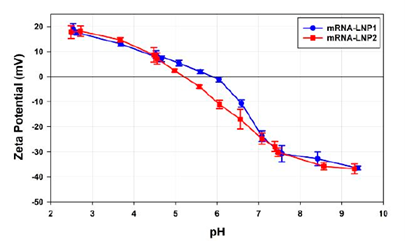 Figure 2. A plot of the zeta potential values (in mV) as a function of pH for mRNA-LNP1 and mRNA-LNP2 samples prepared in 10 nM NaCl.

At low and high pH, both mRNA-LNP samples had approximately the same zeta potential. However, In the middle pH ranges, mRNA-LNP1 was consistently more negatively charged than mRNA-LNP2. Under identical buffer conditions, the cause of this charge difference can only be due to differences in either the lipid composition or mRNA.  Most of the charge associated with a mRNA-LNP will be in the phosphate backbone of the nucleic acid cargo or the charged headgroups of the phospholipids, either as cationic, anionic, or zwitterionic functional groups.

These results predict that mRNA-LNP1 is more stable and/or contains a larger mRNA therapeutic payload, both of which indicate that it is a superior drug candidate to mRNA-LNP2.