Microspot analyses and phase distribution mapping on a carbonaceous chondrite

In this study a slice of the Northwest-Africa 2086 meteorite was subject to micro X-ray diffraction (XRD) investigations. NWA 2086 was found in 2003 with a total known weight of 780 g.

The use of the focusing X-ray lens in combination with positioning stages and sample alignment tools allows us to perform precise microspot analyses with a spatial resolution as high as 50 μm without compromising in intensity. In addition it allows us to perform phase distribution mapping revealing mineralogical differences in heterogeneous samples.

Microspot analyses and phase distribution mapping on a carbonaceous chondrite

Meteorites are records of the solar system formation. Most of them have not gone through significant geological transformations over billions of years and have remained intact since the early stages of our solar system. Therefore the study of the composition as well the mineral association of meteorites provide glimpses of the early stages of planetary accretion and ultimately bring us one step closer to understanding of the formation of the solar system.

In this study a slice of the Northwest-Africa 2086 (NWA 2086, Fig. 1) meteorite was subject to micro X-ray diffraction (XRD) investigations. NWA 2086 was found in 2003 with a total known weight of 780 g. It is classified as a carbonaceous chondrite of the CV3 group[1], which is characterized by the presence of chondrules and calcium-aluminium rich inclusions (CAIs) in a dark-colored matrix. This type of meteorite underwent the lowest degree of thermal or aqueous alteration on the parent body. With an age of 4.567 billion years the CAIs represent the oldest known solid material formed in our solar system.

Phase distribution mapping as well as micro-XRD spot analyses were performed using the Empyrean X-ray diffraction platform configured with a Co tube, an X-ray focusing lens, a programmable X-Y-Z stage and a PIXcel3D detector on a 85 mm radius reduction interface. Sample positioning and height alignment was automatically performed using an alignment camera in combination with the laser alignment tool. Cobalt radiation was used to suppress fluorescence resulting from the significant iron content in the sample.

The focusing lens produces a spot size of 50 μm at the sample position without compromising the signal intensity compared to conventional monocapillaries. Hence a higher spatial resolution can be achieved without the consequence of longer measurement times.

The use of the focusing X-ray lens in combination with positioning stages and sample alignment tools allows us to perform precise microspot analyses with a spatial resolution as high as 50 μm without compromising in intensity. In addition it allows us to perform phase distribution mapping revealing mineralogical differences in heterogeneous samples.

Figure 1. Photograph of the slice (max. dimension 28 x 13 x 2 mm) of the NWA2086 meteorite investigated in this study. White inclusions represent CAIs, the smaller circular shaped features embedded in the matrix are chondrules. 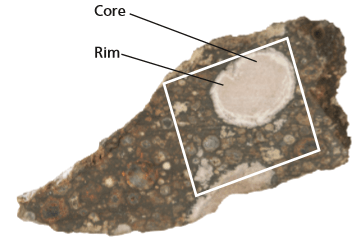 Micro-XRD spot analyses and phase mapping of NWA2086 show that, as expected for this type of meteorite, the major component of the matrix and the chondrules is olivine, (Mg,Fe)2SiO4, with Ca-poor pyroxene, (Mg,Fe,Ca)Si2O6 also present. The CAIs on the other hand are composed of Ca-rich pyroxene (diopside), CaMgSi2O6, spinel, MgAl2O4, anorthite, CaAl2Si2O8, and sodalite, Na8(Al6Si6O24)Cl2. The presence of sodalite has only been reported a few times for CAIs. This is of special interest because sodalite is regarded as a product of Na-Cl metasomatic processes which occurred in the early solar nebula before accretion into protoplanets or is a product of aqueous alteration on the parent body [2,3].

As far as the mineralogical distribution is concerned, mineral mapping shows that the matrix is nearly homogenous in terms of mineralogical composition and almost exclusively consist of olivine. Chondrules and CAIs are clearly separated from the matrix, and most of them show internal microstructures like rims or zonations. Especially the largest, round CAI shows clear mineralogical differences resulting in a core-rim structure (Fig. 2). Spinel and sodalite are clearly enriched in the core and the outer, ‘darker’ parts of the rim. Diopside and anorthite on the other hand show the exact opposite distribution with both of them being enriched in the brighter rim. Figure 3 shows the result of the Rietveld quantification of 2 microspot analyses performed in the center of the large CAI and in the inner, brighter part of the rim. In addition the whole inclusion appears to be ‘patchy’, with local, slight enrichments of diopside, spinel and sodalite throughout the core and the rim. The few very high intensity signals especially visible for olivine, diopside and spinel represent larger single crystals in a special orientation 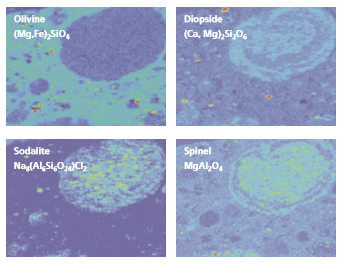 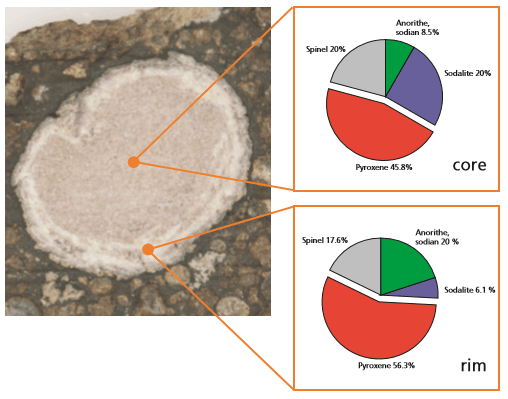 Figure 3. Microspot analyses and results obtained by subsequent Rietveld refinement on the core and the rim of the pre-dominant CAI.

The Empyrean multipurpose platform offers a full range of configurations for geological  studies.  Here we demonstrate microspot analyses and 2-dimensional phase distribution mapping with a spot size of 50 μm. Fine spatial variations in phase composition as well as  the presence of diverse microstructures (e.g. zonations, core-rim structures, inclusions) can be identified. Micro-diffraction is a valuable tool for the study of heterogeneous materials such as rocks, ceramics, building materials or composite materials.