In operando X-ray diffraction (XRD) can investigate these failure mechanisms by analyzing underlying crystal structure changes during battery cycling. In particular, our Empyrean XRD platform can be used for the in operando cycling of various types of battery cells – from coin or electrochemical cells to pouch and prismatic cells.

Why my cells degrade with cycling?

As positive lithium ions move out of the cathode during a charge cycle, its crystal lattice usually expands because of repulsion between the negative oxygen ions. In some materials (such as NCM811), high-voltage cycling may also cause transformation to another crystal phase and in turn, abrupt lattice expansion. This can then cause particle cracking and, eventually, loss of capacity in the battery cell.

Likewise, when lithium ions enter the anode during charging, it also causes expansion of the lattice. In the case of graphite anodes, the lattice structure changes to LiC12 and then to LiC6. During discharge, it reverses back to graphite (C). After a few charge-discharge cycles, some lithium ions may be retained in the anode, causing a reduction in discharge capacity. In the case of alternative anode materials like silicon, which have a much larger initial capacity, the lattice expansion may be so large that particle cracking happens rapidly. 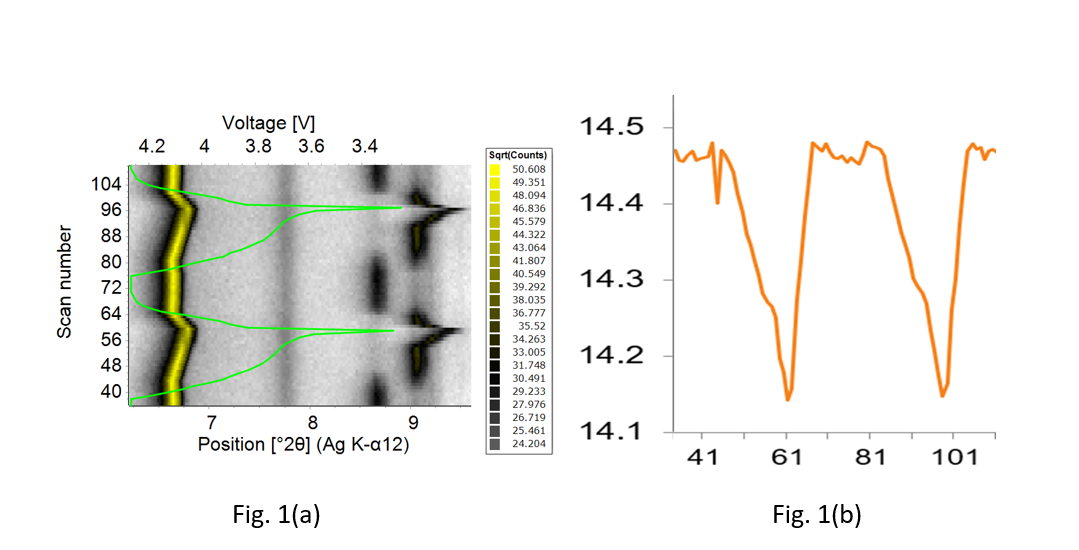 Example of in operando cycling of NCM333 and graphite anode cells. The green line in Fig. 1(a) shows the cell’s voltage variation, from 3.2 volts in its discharged state to 4.3 volts in its fully charged state. The peak around 6.8°2θ is 003 peak of the NCM cathode, and its changing position reflects changes in the C-parameter with cycling. The discontinuous peak around 9°2θ is from the graphite anode, which changes from graphite to LiC12 and then to LiC6 during the charge cycle, and then reverses back to LiC12 and then graphite during the discharge cycle. Fig. 1(b) shows the change in c-parameter during cycling – from 14.47 in a fully charged state to 14.14 in a discharged state.

All types of coin cells that have at least one side with an X-ray transparent window can be studied on the Empyrean XRD. We provide a specialized coin cell holder, which can be used for charge-discharge cycling.
The Empyrean XRD can also support electrochemical cells with an X-ray transparent window, like beryllium or glassy carbon. We can supply these electrochemical cells – with the option of heating and cooling – that can then be mounted on the Empyrean XRD.

Fig. 2(a) An electrochemical cell supported on the Empyrean XRD platform. The cell can also be heated or cooled to investigate cycling durability at non-ambient temperatures. Fig. 2(b) shows a coin cell holder with electrical connections, for mounting coin cells that have at least one face with an X-ray transparent window.

Fig. 3(a) shows pouch or prismatic cell mounting on the Empyrean XRD. A mechanism to apply pressure on pouch cells is also supported. Fig. 3(b) shows the high-performance GaliPIX3D detector with CdTe sensor, making in operando XRD on thick pouch cells possible.

How I make it profitable with right valuation?
Battery recycling
Why the first step in manufacturing is the most important?
Cathode precursors
How to optimize and control the electrode materials?
Batteries and supercapacitors